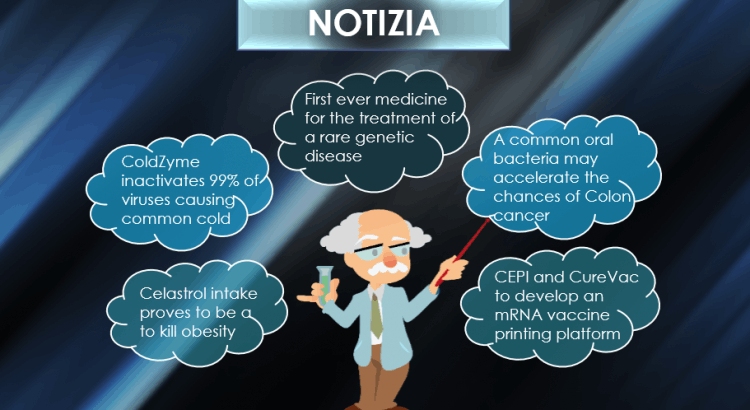 An Oral spray ColdZyme contains a solution of proteolytic enzyme trypsin and glycerol, which happens to shorten the duration of the common cold and also reduces its gravity. A recent research by –a Swedish based life sciences company shows the clinical benefits of Enzyme-based oral spray that significantly impacts individual symptoms of sore throat, nose congestion, and headache.

First ever medicine for the treatment of a rare genetic disease

A common oral bacteria may accelerate the chances of Colon cancer

A recent research by Columbia University College of Dental Medicine has found out that a common oral bacteria F.nucleatum known for causing tooth decay increases the chances of getting diagnosed with Colon cancer. About a third of colorectal cancers are associated with the bacteria. F. nucleatum makes a molecule- FadA adhesion which triggers a signaling pathway in colon cells that only invigorates the growth of cancerous cells.

CEPI and CureVac to develop an mRNA vaccine printing platform

The Coalition for Epidemic Preparedness Innovations (CEPI) has joined hands with CureVac –a German biopharmaceutical firm which in the process of developing a transportable automated messenger RNA (mRNA) vaccine printing platform. The aim behind the printer is to print lipid-nanoparticle (LNP)-formulated mRNA vaccine for both known as well as unknown pathogens.

Celastrol intake proves to be an effective way to kill obesity

The recent findings by Umut Ozcan have revealed that an amount of a receptor called IL1R1-a receptor present in Celastrol is responsible for its anti-obesity effect. The receptor receives signals from the cytokine interleukin 1 which acts as the gatekeeper for Celastrol’s metabolic actions.