Request a sample to unlock the CAGR for Alcohol Use Disorder Market.

Alcohol use disorder (AUD) is a highly prevalent, chronic, relapsing condition characterized by an impaired ability to stop or control alcohol use despite significant impairment, distress, or other adverse consequences. It is one of the most common substance use disorders globally with millions impacted by it. Its variability in clinical presentation, suggests a complex interaction between various environmental, physiological, psychological, social, and biological factors resulting in disease development and progression.

It is a highly heterogeneous condition with complex biology, that impacts a person physically, emotionally, and socially and is controlled by many genes and gene-by-environment interactions, wherein a robust genetic influence predisposes certain individuals to develop AUD. A serious public health threat, it causes significant societal harm with high morbidity and mortality.

A person with AUD may experience both intoxication and withdrawal symptoms such as unstable moods, poor judgment, slurred speech, problems with attention or memory, poor coordination, sweating, rapid heartbeat, hand tremors, problems sleeping, nausea and vomiting, hallucinations, restlessness and agitation, anxiety, and occasionally seizures. It is classified as mild, moderate, or severe, based on the number of symptoms experienced by an individual.

The US Preventive Services Task Force has recommended three methods to screen for heavy alcohol use. These methods are the Alcohol Use Disorders Identification Test (AUDIT), the AUDIT-C, or a single question such as “How many times in the past year have you had 5 (for men) or 4 (for women) or more drinks in a day?”

The diagnosis of AUD requires testing an individual based on DSM-V diagnostic criteria, to access if symptoms of AUD are present. DSM-V lists various potential criteria for AUD, covering four main aspects of alcohol use which are impaired control, social impairment, risky use, and pharmacological effects. The presence of at least two of these symptoms indicates an AUD. DSM-V criteria also help determine the severity of AUD. Based on the number of symptoms present the individual is classified into mild, moderate, and severe cases of AUD.

Besides the DSM criteria, another internationally accepted diagnostic criteria is the ICD published by the World Health Organization (WHO). Alcohol Dependence Syndrome according to ICD-10 has 6 central features, of which the presence of 3 or more in a clustered way, typically over 12 months or more is indicative of AUD.

Continued in the report…..

Management strategies for patients presenting with AUD need to be tailored depending on the presenting complaint, the level and duration of use, the severity of dependence, the presence of any additional comorbid substance use disorders, any physical and/or mental health conditions; and motivation to change. Management always needs to start with the engagement of the patient in the process and understanding their initial goals for treatment.

Mostly the main goal of AUD treatment is either complete abstinence or reduction of heavy drinking and the current treatment options include medication-assisted treatment, behavioral interventions, detox, and psychosocial assistance from rehab and support groups. The mainstay treatment though is psychosocial intervention but with high relapse rates, the best way is to combine pharmacotherapy with psychosocial counseling and intervention.

Currently, there are four US FDA-approved medication-assisted treatments for AUD, that includes Acamprosate, ANTABUSE (disulfiram), REVIA (oral naltrexone), and VIVITROL (extended-release injectable naltrexone). Besides these TOPAMAX (topiramate) is also endorsed by the National Institute on Alcohol Abuse and Alcoholism for the treatment of AUD.

Moreover, SELINCRO (nalmefene) is approved in the EU and Japan and is one of the first drugs that reduces alcohol cravings in individuals on an as-need basis and does not require abstinence. Other drugs are approved in certain specific countries like BACLOCUR (baclofen) in France and Sodium oxybate (SMO) in Italy. The market for AUD is also inclusive of many off-label and generic products such as gabapentin, varenicline, benzodiazepines, memantine, ondansetron, aripiprazole, and suvorexant, among others.

Continued in the report….. 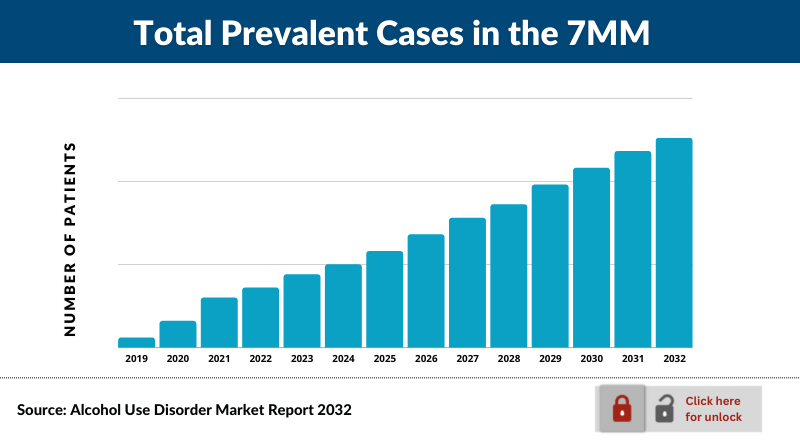 AD04 (ondansetron) being developed by Adial Pharmaceuticals is a genetically targeted, serotonin-3 (5HT3) receptor antagonist that interrupts the reinforcing effects of alcohol, and thus reduces the urge to drink. It is being developed for the treatment of AUD in patients of select genotypes. The blockade of 5HT3 receptors influences the dopamine reward system activated by alcohol, decreasing dopamine release and attenuating the craving for alcohol. AD04 contains an ultra-low dose of ondansetron, which is currently marketed as an anti-emetic for post-operative and post-chemotherapy nausea. Adial Pharmaceuticals has completed ONWARD Phase III clinical trials which evaluated the efficacy, safety, and tolerability of AD04 in patients with AUD and selected polymorphisms in the serotonin genes. It plans to submit these results to both the US and European regulatory agencies for further development and is also exploring potential partnership opportunities in both the US and Europe. Also, EMA has accepted Adial’s Pediatric Investigation Plan for the development of AD04, for the treatment of AUD in the pediatric population.

MN-166 (ibudilast) being developed by MediciNova is a novel, first-in-class, non-opioid glial cell modulator that inhibits phosphodiesterases (PDE) -4 and PDE-10 and macrophage migration inhibitory factor (MIF). It leads to a decrease in pro-inflammatory cytokines. Ibudilast is being developed to treat AUD through its anti-inflammatory and pro-neurotrophic mechanisms. It suppresses pro-inflammatory cytokines IL-1ß, TNF-a, and IL-6 and upregulates the anti-inflammatory cytokine IL-10. MediciNova is currently conducting Phase II trials to evaluate MN-166 for the treatment of AUD. It has an exclusive license agreement with Kyorin Pharmaceutical for the global development and commercialization of MN-166.

CORT118335 by Corcept Therapeutics is a glucocorticoid receptor (GR) antagonist being developed for the treatment of AUD. Aberrant glucocorticoid signaling via GRs plays a critical role in AUD. The GR antagonist mifepristone decreased alcohol consumption in dependence during acute withdrawal and protracted abstinence. However, the regulation of CeA synaptic GABA transmission by GR is currently unknown. Corcept Therapeutics by doing academic collaborations is trying to augment development efforts for the treatment of AUD. Recently a Phase II trial by Scripps Research Institute in collaboration with NIAAA was completed for the treatment of moderate or severe AUD with CORT118335. However further update from the company is awaited.

List of products to be continued in the report… 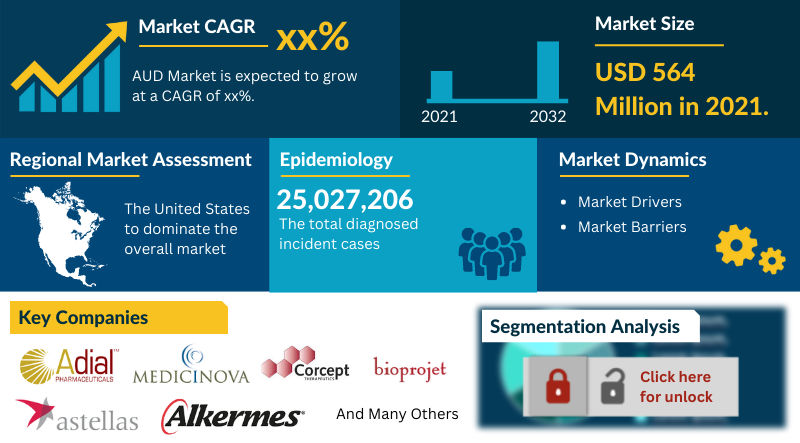 At present, there are four approved therapies for the treatment of AUD that includes disulfiram, Naltrexone (oral), acamprosate, and VIVITROL. Most of these therapies were approved decades ago and have their generics in the market. The current AUD market in the US is dominated by these therapies.

Naltrexone, the best-studied of the approved medications, is an antagonist of the mu-opioid receptor with an additional affinity for kappa and delta opioid receptors. In 1994, the US FDA approved oral naltrexone sold by DuPont under the brand name REVIA for the treatment of alcoholism. Though it significantly reduced alcohol craving and drinking rates it required strict compliance. To address this issue the extended-release depot formulation of naltrexone was developed to improve adherence. In April 2006, the US FDA approved VIVITROL (naltrexone for extended-release injectable suspension) marketed by Alkermes. This once-a-month injectable formulation of naltrexone helped in maintaining therapeutic medication levels in the body through a single intramuscular injection every four weeks. The demand for complete abstinence before the treatment is started is the major disadvantage of Naltrexone. Though an FDA-recommended first-line treatment that reduces binge drinking, naltrexone is a costly drug with an FDA label warning that significantly impacts its market availability.

Another decade-old approved drug, Acamprosate, the first approved treatment for alcohol dependence in Europe, is often considered an ‘artificial alcohol’ or a ‘functional glutamate antagonist. Multiple meta-analyses have found acamprosate to reduce alcohol consumption compared to placebo and increased cumulative duration of abstinence. It is FDA-approved for abstinence maintenance in AUD patients who are abstinent when beginning treatment. Usually administered as the first line of treatment it is best for maintaining sobriety once the patient has achieved abstinence.

ANTABUSE (disulfiram), the first US FDA-approved (in 1951) medication for AUD treatment, is the oldest drug in the AUD market. Marketed by Odyssey pharmaceuticals it is an oral aldehyde dehydrogenase inhibitor that acts by blocking the metabolism of alcohol. NICE guidelines suggest that disulfiram should be used as a second-line treatment when other approved medications fail. However, there is no consensus on the trial methodology for assessing the efficacy of disulfiram since it cannot be appraised fairly in double-blind, RCTs due to its mechanism of action.

Besides these SELINCRO (nalmefene) developed by Lundbeck is approved in the EU and Japan and addresses the need for abstinence in AUD patients. Being the drug that addresses the major unmet of abstinence, it has shown immense success in the European and Japanese markets. However, it has not been approved for sale in the US.

The considerable heterogeneity of AUD patients makes it especially challenging to design a single drug capable of treating AUD patients as a whole. Current pharmacotherapies are often characterized by limited efficacy and there is a large treatment gap in alcohol dependence with the current treatments only moderately effective in preventing relapse. The need for abstinence and the associated social stigma further complicates the treatment regime. The expected launch of potential therapies that include AD04 (ondansetron) (Adial Pharmaceuticals), CORT118335 (mifepristone) (Corcept Therapeutics), and MN-166 (ibudilast) (MediciNova) may address this unmet need, increase the market size in the coming years, assisted by an increase in the diagnosed prevalent population of AUD during the forecast period [2022-2032].

According to DelveInsight, the overall dynamics of the AUD market is anticipated to change in the coming years owing to the expected launch of emerging therapies.

This section provides the total Alcohol Use Disorder market size and market size by therapies in the United States.

The total Alcohol Use Disorder market size and market size by therapies in Germany, France, Italy, Spain, and the United Kingdom are provided in this section.

The total Alcohol Use Disorder market size and market size by therapies in Japan are provided. 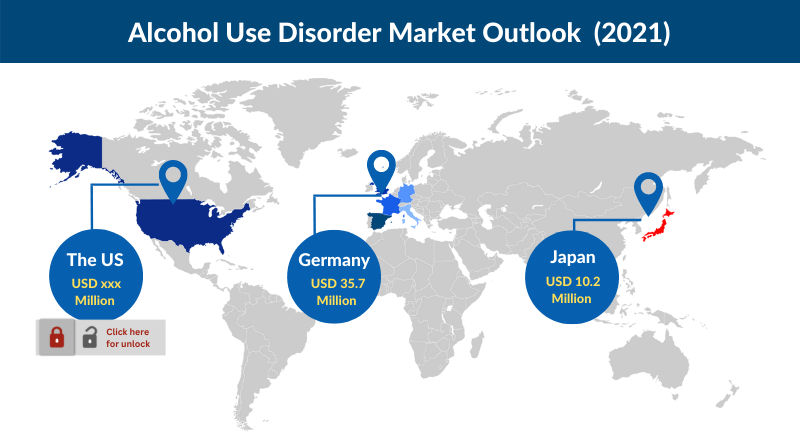 This helps in understanding the drugs with the most rapid uptake, and the reasons behind the maximal use of new drugs and allows, the comparison of the drugs based on market share and size which again will be useful in investigating factors important in market uptake and in making financial and regulatory decisions.

Reimbursement Scenario in Alcohol Use Disorder

Approaching reimbursement proactively can have a positive impact both during the late stages of product development and well after product launch. In the report, we consider reimbursement to identify economically attractive indications and market opportunities. When working with finite resources, the ability to select the markets with the fewest reimbursement barriers can be a critical business and price strategy.

Scope of the Alcohol Use Disorder Report

3. AUD Market Overview at a Glance

7.5.1. Neuroimmune Activation in the Pathology of Alcoholism

8.3. Assumptions and Rationale: the 7MM

8.4. Total 12-month Diagnosed Prevalent Cases of AUD in the 7MM

8.5.2. Gender-specific Diagnosed Prevalent Cases of AUD in the US

8.5.3. Type-specific Diagnosed Prevalent Cases of AUD in the US

8.6.2. Gender-specific Diagnosed Prevalent Cases of AUD in the EU-5

8.6.3. Type-specific Diagnosed Prevalent Cases of AUD in the EU-5

8.6.8.2. Gender-specific Diagnosed Prevalent Cases of AUD in the UK

8.6.8.3. Type-specific Diagnosed Prevalent Cases of AUD in the UK

Figure 3: Neuroimmune contributions to the cycle of addiction