Cryopyrin-associated Periodic Syndromes (CAPS) is a group of auto-inflammatory as well as known autosomal dominant disorder that is believed to be caused by owing to mutations in the NLRP3 gene encoding a protein called cryopyrin. NLRP3 is a part of the inflammasome protein. For initiation of the innate inflammatory response, inflammasome activation is needed. Other CAPS also cause mutations in NLRP3, which in turn leads to the overproduction of Interleukin beta-1 (IL-1β) CAPS and basically comprises of three diseases that vary with the severity and the system they are involved in. The mode of inheritance is autosomal dominant with variable penetrance (means only one copy of the gene from one parent is sufficient enough to cause this medical condition).

CAPS comprises a group of three disorders, varying with their severity and the organs they tend to affect upon the onset, namely Neonatal Onset Multisystem Inflammatory Disease (NOMID), also called as Chronic Inflammatory Neurological Cutaneous Articular Syndrome (CINCA), Familial cold auto inflammatory syndrome (FCAS) and Muckle–Wells syndrome (MWS). NOMID is the most severe form of CAPS, along with episodic fever and chills, is accompanied by other associated symptoms like Central Nervous System Inflammation fever bouts (beginning in infancy), followed by rash flare-ups, and elevated joint pain and red eyes. On the other hand, MWS is an intermediate form of CAPS. In this case, symptoms like frequent rashes starts in infancy or early adolescence. Occasional fever, joint pain, frequent conjunctivitis, gradual hearing loss, and amyloidosis are symptoms of MWS. FCAS, also known as familial cold urticariais is the mildest form of CAPS with fever and other symptoms, the onset of rash flares begins in early childhood or occasionally in early childhood in all FCAS patients. Hearing loss and Amyloidosis renal disease is rare in FCAS patients. The symptoms and severity of CAPS vary by disease, but some of the sign include, inflammation in multiple organs, hive-like rash, periodic fever and flare-ups, headache, bulging eyes, blindness, hearing loss, vomiting, joint pain, swelling etc. Other symptoms that are specific to one type of disease include, hive-like rash on exposure to cold or other environmental triggers in FCAS and in MWS, symptoms may come and go.

Diagnosis of CAPS is based on clinical manifestations and on laboratory findings revealing generalized leukocytosis and neurophilia along with others elevated acute phase reactants (C reactive protein and serum amyloid A). Some of the laboratory tests that are used include, genetic testing that recognizes differences in chromosomes, genes, or proteins. Skin Biopsy of the rash, eye examination, hearing tests, imaging tests, etc.

In order to treat a rare disease such as CAPS, several anti-inflammatory medications, immunosuppressants, and antihistamines have been tested to regulate the signs and symptoms seen in CAPS. These include, methotrexate, cyclosporine, azathioprine, cyclophosphamide, and tumor necrosis factor blockers but they have all been unsuccessful. In recent years, research has shown that biologic drugs targeting interleukin-1 are effective in treating CAPS. Anakinra, rilonacept, and canakinumab are included in these IL-1 inhibitors. These three drugs are FDA approved and majorly contributes in treating CAPS’s patients. It is essential to take these therapies for life, but it will encourage children to lead near-normal lives. Some therapies may also include physical therapy, joint alignment medication splints, and NSAIDs, symptom-lowering corticosteroids, or methotrexate. Surgery can correct deformities in the joint.

The CAPS epidemiology division provides the insights about historical and current CAPS patient pool and forecasted trend for United States. It helps to recognize the causes of current and forecasted trends by exploring numerous studies and views of key opinion leaders. This part of the DelveInsight report also provides the diagnosed patient pool and their trends along with assumptions undertaken.

The drug chapter segment of the CAPS report encloses the detailed analysis of CAPS marketed drugs and pipeline drugs. It also helps to understand the CAPS clinical trial details, expressive pharmacological action, agreements and collaborations, approval and patent details, advantages and disadvantages of each included drug and the latest news and press releases.

Kineret (anakinra) is a recombinant, non-glycosylated form of the human interleukin-1 receptor antagonist (IL-1Ra). In January 2013, the US Food and Drug Administration (FDA) approved Kineret for the treatment of NOMID.

Kineret was the first and only FDA-approved therapy treatment for NOMID, the most severe form of CAPS.

Ilaris (Canakinumab), previously known as ACZ885, is a recombinant, human anti-human-IL-1β monoclonal antibody that belongs to the IgG1/κ isotype subclass. In June 2009, the US FDA approved Ilaris (canakinumab) for the treatment of children and adults with CAPS, which includes a number of rare but life-long auto-inflammatory disorders with debilitating symptoms and limited treatment options. The FDA granted priority review to Ilaris based on its potential to meet an important clinical need for patients with CAPS.

Rilonacept, formerly known as IL-1 TRAP, is a targeted inhibitor of interleukin-1 (IL-1), the key driver of inflammation in CAPS. Rilonacept is a dimeric fusion protein consisting of the ligand-binding domains of the extracellular portions of the human interleukin-1 receptor component (IL-1RI) and IL-1 receptor accessory protein (IL-1RAcP) linked in-line to the Fc portion of human IgG1. Arcalyst is used to treat adults and children 12 years of age and older with CAPS, including FCAS and MWS. In February 2008, the US FDA approved Arcalyst (rilonacept) an interleukin-1 blocker, for the treatment of CAPS, including FCAS and MWS in adults and children 12 and older.

Note: Detailed Current therapies assessment will be provided in the full report of CAPS

ATI-450 formerly known as CDD-450 is an investigational drug which is a unique p38α MAPK–MK2 pathway selective inhibitor used to expose the function of this protein complex in inflammasome priming signals. Notably, ATI-450 is as efficacious as global p38α MAPK inhibitors in decreasing inflammation in disease models. CAPS and the most severe form of the disease, NOMID result from dysregulated inflammasome generating elevated systemic levels of the cytokine IL-1β.

In August 2017, Aclaris Therapeutics, announced that it has acquired Confluence Life Sciences—a privately held biotechnology company focused on the discovery and development of kinase inhibitors to treat inflammatory and immunological disorders and cancer. The issued U.S. patents covering ATI-450, are expected to expire in 2034 and other issued patents covering different MK2 signaling pathway inhibitors are expected to expire in 2031 and 2032.

The drugs which are in pipeline include:

Among the approved therapies, Canakinumab is dominating the current market owing to well-established efficacy and safety profile, rapid and sustained response, and a significantly less-frequent dosing schedule (i.e., once every eight weeks).

The high-cost of rare disease drugs usually have a limited impact on budget due to the small number of eligible patients being prescribed the drug.

Several rare disease therapies have been approved by the US FDA in the past few years. From a patient perspective, health insurance and payer coverage guidelines surrounding rare disease treatments restrict broad access to these treatments, leaving only a small number of patients who can bypass insurance and pay for products on their own. Insured patients in the United States are typically granted access to rare disease drugs. This is due to several factors, including about half of rare diseases affecting children, which makes management difficult, without coverage after approval.

To keep up with current market trends, we take KOLs and SME’s opinion working in CAPS domain through primary research to fill the data gaps and validate our secondary research. Their opinion helps to understand and validate current and emerging therapies treatment patterns or CAPS market trend. This will support the clients in potential upcoming novel treatment by identifying the overall scenario of the market and the unmet needs.

Scope of the Report

4. Market Share (%) Distribution Overview at a Glance: By Therapies

6.1. Severity along with Signs and Symptoms

7.3.1. Total Prevalent Cases of CAPS in the United States

7.3.2. Total Diagnosed Prevalent Cases of CAPS in the United States

7.3.3. Age-Specific Prevalent Cases of CAPS in the United States

7.3.4. Type-specific Prevalent Cases of CAPS in the United States

7.3.5. Severity-specific Prevalent Cases of CAPS in the United States

7.3.6. Treated cases of CAPS in the United States

14.3.2. Total Market Size by Therapies in the United States

Table 5: Items and definitions for diagnostic criteria for CAPS

Figure 4:The initiation of diseases

Figure 5 The structure of the inflammasome, intracellular signaling pathways, and therapeutic targets in autoinflammatory diseases

Figure 6: Items and definitions for diagnostic criteria for CAPS 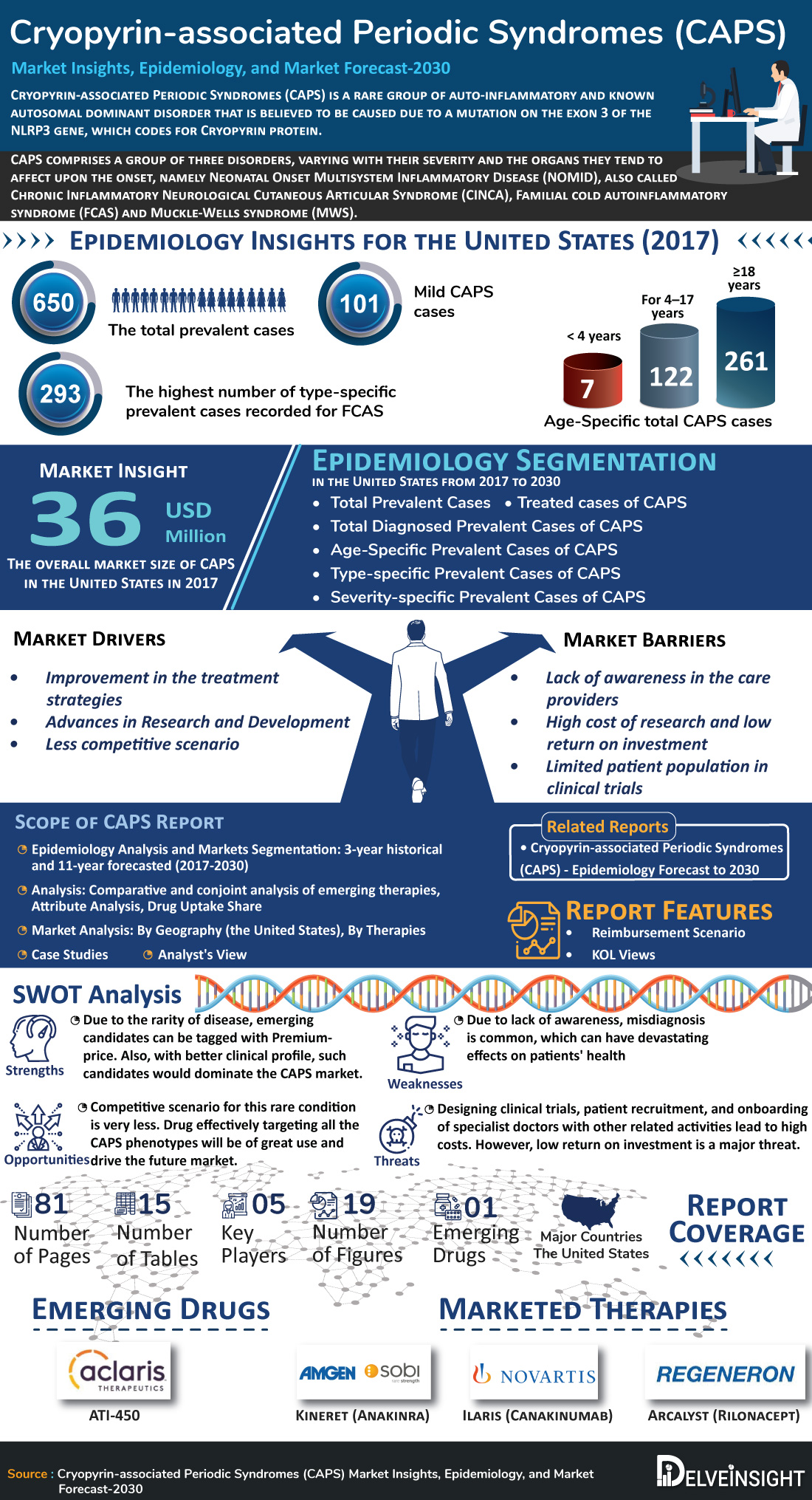