How Robots Are Introducing A New Dimension To Healthcare Service Delivery

Is Subscription Model Going to be the New Normal for Healthcare Industry?

Wearable Devices: Weighing the Potential Benefits and Pitfalls of the Innovative Wearable Products

22 Healthcare Trends & Innovations to Watch in 2022 and Beyond 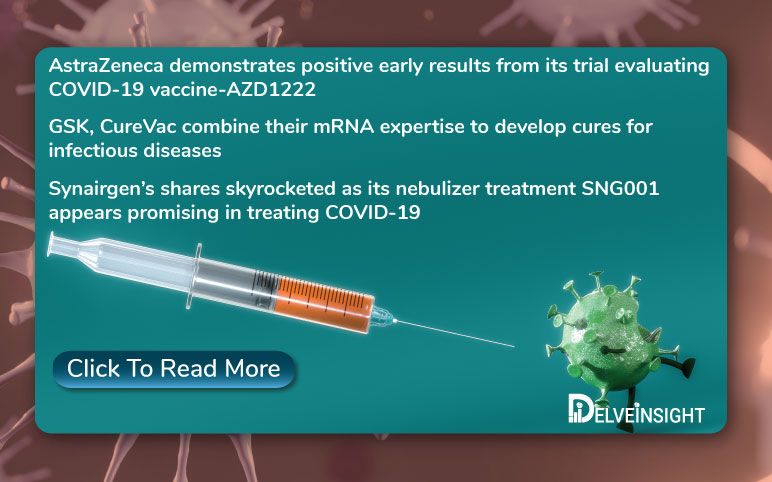 In a frenzied race to find a global cure for COVID-19, several pharma players are testing waters and presenting results from clinical studies evaluating their potential candidates.

According to the study published in the Lancet, the vaccine was able to produce neutralizing antibodies and immune T-cells to tackle SARS-CoV-2. The majority of the side effects were mild or moderated, including headaches, and site reactions, which healed over time. The vaccine was found to be safe and tolerable.

Phase I results also demonstrated the ability of immune cells to remember the virus particles and provide extended ability to fight COVID-19. The duo has already transitioned towards conducting Phase III trials in Brazil, and will soon be conducting trials in the US as a part of Operation Warp Speed. AZ has also partnered with several of the pharma manufacturing companies to manufacture the doses of its candidate after it gets manufacturing license.

GSK has announced to invest a hefty amount of USD 328 Million in Germany-based pharma company CureVac to buy 10% stake in the company.

The strategic partnership will bolster the development of up to five messenger RNA (mRNA)-based vaccines and monoclonal antibodies (mAbs) targeting infectious disease pathogens.

Although, GSK has its mRNA research ongoing, however, it is still in its infancy. Whereas, CureVac is exploring the potential of mRNA in developing cures for cancers and diseases of the eye, liver, and lung. The companies have decided to leverage the power of mRNA research and combine their expertise in developing potential vaccines for different infectious diseases.

CureVac, at present, is one of the pharma players that is proactively evaluating its vaccine candidate, CVnCoV Vaccine, in Phase I trial. However, CureVac’s COVID-19 vaccine, as well as ongoing rabies vaccine research, is not a part of the collaboration.

UK-based, Synairgen, specializing in expanding R&D and drug discovery for respiratory disorders such as asthma, and COPD, has demonstrated the potential effects of its nebulizer treatment, SNG001 in treating COVID-19.

After the announcement of the positive results of nebulizer treatment, the company’s shares soared up 373%.

The mechanism is based on the formulation of SNG001 comprising an interferon beta protein, which is produced by the body under attack by viral particles. The formulation is inhaled directly into the lungs and shall generate an immune response against the virus.

Moreover, the company is positive about its therapy stating that the patients receiving its treatment have more than twice the chance to recover over the course of treatment and that SNG001 administration reduced breathlessness and significantly decreased the number of hospitalized COVID-19 patients who progressed from requiring oxygen to requiring ventilation as compared to placebo.

Love Pharma Completes the Acquisition of MicroDoz Therapy LOVE Pharma Co. has announced the completion of its acquisi...

Commercial Roadmap for the Launch: What can Biopharmaceuticals do to Increase...

The Pharma and Biotech Healthcare market has been an ever-changing industry in terms of...

Emerging Market for Organ on a Chip

The organ on a chip is a microfluidic culture device that recapitulates the complicated...

An Intraocular Lens implant is a synthetic, artificial lens placed inside the eye...

Ankylosing Spondylitis is a form of arthritis that primarily affects the spine. It caus...

Hear from our subject-matter experts and in-house KOL’s on Pharma and Healthcare market trends.

Thank you for showing your interest.