NRG1 (Neuregulin 1) gene fusions are potentially actionable oncogenic drivers that are present in some solid tumors. NRG1 fusions result in ErbB-mediated pathway activation and present a rational therapeutic target. Oncogenic fusions of NRG1 may cause excess accumulation of the NRG1-fusion protein at the cell surface. This causes persistent activation of ErbB receptor tyrosine kinases that drive excess activity in the mTOR and MAPK pathways and promote tumorigenesis. The NRG1 gene encodes ligands for the ERBB2 (HER2)-ERBB3 heterodimeric receptor tyrosine kinase. Gene fusions of NRG1 such as CD74-NRG1 and SLC33A2-NRG1 have been found at low frequency in a wide range of carcinomas including lung, breast, colorectal, ovarian, and pancreatic cancers and with a wide range of fusion partners.

CD74-NRG1 fusion gene has been identified in a portion of invasive mucinous adenocarcinomas (IMA) of the lung. However, the function of the CD74-NRG1 fusion gene in adenocarcinoma pathogenesis and the mechanisms by which it may impart protumorigenic characteristics to cancer stem cells (CSC) is still unclear. A range of NRG1 fusion partners beyond CD74 has been identified, and they also vary among cancer types. In NSCLC, other fusion partners include the SDC4, SLC3A2, and ATP1B1 genes. In other malignancies, the genes SETD4, TSHZ2, and ZMYM2 (ovarian cancer); ADAM9 and COX10-AS1 genes (breast cancer); and CDH1 and VTCN1 genes (pancreatic cancer) are among known fusion partners of NRG1.

Fusions involving the neuregulin-1 gene (NRG1) were first identified by transcriptome sequencing of lung adenocarcinomas, which revealed fusion of CD74 to NRG1. NRG1-fusion proteins and genes in solid tumors are detected primarily using immunohistochemistry and fluorescence in situ hybridization (FISH) techniques, DNA next-generation sequencing (NGS), and targeted gene fusion panels on RNA. The gold standard for the detection of NRG1 gene fusions is RNA sequencing in comparison with DNA sequencing. Although fluorescence in situ hybridization (FISH) can be used as a pre-screening method for its detection, only genetic sequencing will allow the identification of the gene fusion. RNA-sequencing is associated with higher sensitivity for genetic rearrangements and can increase the detection of NRG1 gene fusions compared with DNA-based methods, which often do not cover the large introns in NRG1.

NRG1 gene fusions result in the activation of ErbB2-/ErbB3-mediated signaling pathways and may function as oncogenic drivers. NRG1 fusions have emerged as a potential therapeutic target across multiple tumor types, including NSCLC.

For NRG1 fusions, there are currently no approved targeted therapies. Standard therapy for advanced tumors harboring NRG1 fusions remains chemotherapy and/or immunotherapy or novel anti–PD-1 or anti–PD-L1 agents. The problem with utilizing these therapies is that response tends to be suboptimal for patients with NRG1 fusions. Several clinical reports have demonstrated that NRG1 fusions are a viable, actionable target in tumors, with responses seen on inhibition of ERBB family members.

The Rare NRG1 Fusion epidemiology division provides insights about the historical and current Rare NRG1 Fusion patient pool and forecasted trends for seven major countries. It helps to recognize the causes of current and forecasted trends by exploring numerous studies and views of key opinion leaders. This part of the DelveInsight report also provides the diagnosed patient pool and their trends along with assumptions undertaken. 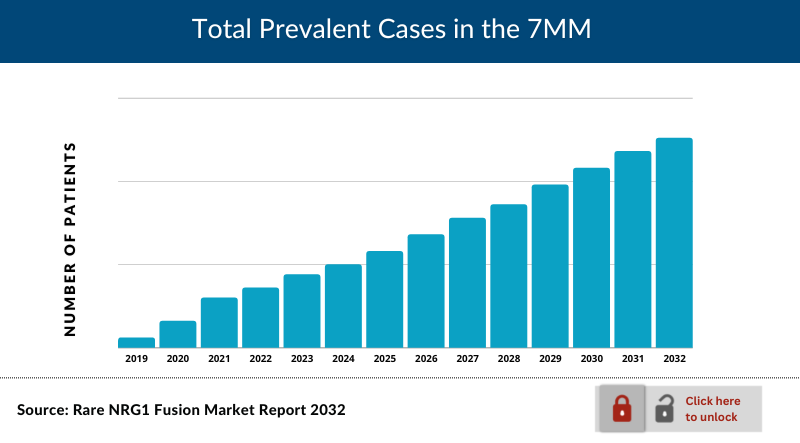 MM-121 (Seribantumab) is a fully human monoclonal antibody by Elevation Oncology. It is designed to stop the HER3 signaling that sustains an NRG1 fusion-positive tumor. Seribantumab binds to HER3 so that the NRG1 fusion protein that over-activates it, cannot bind to it. Seribantumab is being developed as a precise treatment path for patients whose tumor growth is driven by an NRG1 fusion. MM-121 is currently in the Phase II clinical development stage. It is now being studied in patients with solid tumors of any origin that test positive for an NRG1 fusion. US FDA granted seribantumab Fast Track designation and Orphan Drug Designation for development in patients with heregulin-positive, locally advanced or metastatic non-small cell lung cancer (NSCLC) whose disease has progressed following immunotherapy.

Zenocutuzumab (MCLA-128) is an experimental medicine that is being developed by Merus. It is believed to work by blocking the action of the growth factor NRG1, a protein that can be overproduced due to NRG1 Fusions and prohibiting it from binding to HER3. HER3 is a protein that sits on the surface of cancer cells, which when it combines with a second surface protein HER2, sends signals to drive tumor growth and survival. NRG1 induces the combination of HER2 and HER3. Zenocutuzumab is a bispecific antibody, which means it can recognize two different proteins, specifically HER2 and HER3. It is designed to have a dock and block mechanism. Currently, Zenocutuzumab is in the Phase II clinical development stage for the treatment of NRG1 fusion Solid Tumors.

HMBD-001 is a unique antibody engineered to bind strongly and specifically to the dimerization interface of HER3, thereby interfering with HER3’s ability to dimerize and fully blocking its activation, regardless of NRG1 binding. This gives HMBD-001 a novel action mechanism for inhibiting tumor growth and drug resistance in HER3-driven cancers. Preclinical models have shown that HMBD-001 potently inhibits the activation of the MAPK/PI3K signaling pathway – and consequently prevents tumor growth and drug resistance. Currently it is being investigated in Phase I for NRG fusion protein. 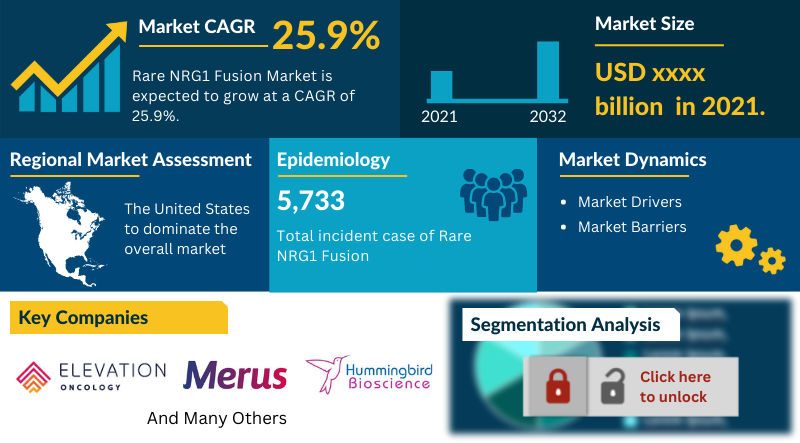 NRG1 Fusion is a rare but potentially actionable oncogenic driver that is present in some solid tumors. These fusions can promote pathologic signaling via MAPK and other canonical pathways. The most frequently reported NRG1 fusion is CD74-NRG1, which most commonly occurs in patients with invasive mucinous adenocarcinomas (IMAs) of the lung, although several other NRG1 fusion partners have been identified in patients with lung cancer, including ATP1B1, SDC4, and RBPMS. While there are studies of therapeutic efficacy with agents that target Erb-B2/Erb-B3, little is known about the characteristics of these fusions. Being a rare disorder, there is no specific treatment for NRG1 Fusion.

Currently, there are no approved targeted therapies for NRG1 fusions. Standard therapy for advanced tumors harboring NRG1 fusions remains chemotherapy and/or immunotherapy or novel anti–PD-1 or anti–PD-L1 agents. The problem with utilizing these therapies is that response tends to be suboptimal for patients with NRG1 fusions. The outcomes of preclinical studies have suggested that repurposing FDA-approved HER inhibitors, such as Afatinib (Gilotrif), may have a highly attractive therapeutic strategy for NRG1 fusion-positive tumors.

At present, some companies have indulged themselves in initiating clinical trials that investigate new treatment options or studying how to use existing treatment options better. Key players such as Elevation Oncology (Seribantumab), Merus (Zenocutuzumab), Hummingbird Bioscience (HMBD-001), and several others are investigating their candidates for the management of Rare NRG1 Fusions.

The total market size of NRG1 Fusion therapies in the United States is expected to increase with a CAGR of 26.8% in the study period (2019–2032). 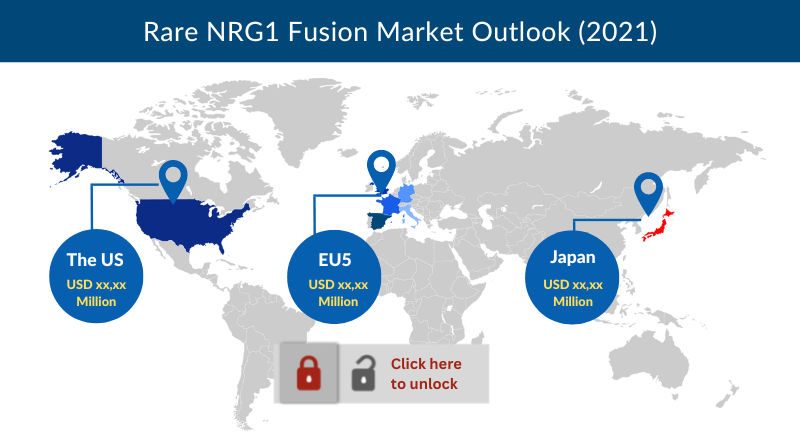 The drugs which are in forecast include:

This section focuses on the rate of uptake of the potential drugs expected to get launched in the market during the study period 2019-2032. The analysis covers Rare NRG1 fusion market uptake by drugs; patient uptake by therapies; and sales of each drug. For example- Seribantumab which is an intravenous infusion monoclonal HER3 inhibitor/ERBB-3 receptor antagonist binds to HER3, so the NRG1 fusion protein that over-activates it cannot bind to it. Currently, the drug is in the Phase II stage of clinical development for NRG1 fusion positive locally advanced or metastatic solid tumors. Elevation Oncology believes that the design and conduct of CRESTONE, subject to discussions with the FDA, may support the submission of a BLA for accelerated approval in advanced solid tumors harboring an NRG1 fusion. The drug is expected to launch in US in 2024. As per our analysis, Seribantumab drug uptake in the US is expected to be medium- fast with an estimated peak share of 30%.

To keep up with current market trends, we take KOLs and SME’s opinion working in the Rare NRG1 Fusion domain through primary research to fill the data gaps and validate our secondary research. Their opinion helps to understand and validate current and emerging therapies treatment patterns or Rare NRG1 Fusion market trends. This will support the clients in potential upcoming novel treatment by identifying the overall scenario of the market and the unmet needs.

Scope of the Report

14.5.1. Total Market Size of NRG1 Fusion in the United States

14.5.2. Market Size of NRG1 Fusion by Therapies in the United States

Table 4: The advantages and disadvantages of different assays available for the detection of NRG1

Figure 8: Mechanism of action of NRG1

Figure 18: Total Stage-specific Metastatic (including locally advanced) Cases of NRG1 Fusion in the US (2019–2032)