Is it the Dawn of Biologics in the Eosinophilic Esophagitis Treatment Landscape?

Eosinophilic Esophagitis (EoE) is a chronic inflammatory ailment that is immune-mediated. It is characterized by an increased number of eosinophils infiltrating the esophagus, thus, impacting one’s fundamental eating ability. It affects both adults and children and is caused by allergens; food antigens are considered the main precursors of EoE, although other genetic and environmental factors are also known. The incident and prevalent cases of EoE have been on an upsurge at an outpaced rate not just because of increased awareness or better diagnosis but also due to the understanding of the pathophysiology along with an increase in the number of other potential risk factors like food and air allergens, early-life exposures to proton pumps or antibiotics, acid suppressants, and preterm birth, etc.

As per Delveinsight analysis, this increase in eosinophilic esophagitis prevalence is expected to reach 1 billion by 2032 among the seven major markets.

Until 2022, the eosinophilic esophagitis treatment was managed by dietary eliminations and medical treatments like proton pump inhibitors and swallowed topical steroids (budesonide and fluticasone), which helped relieve symptoms and inflammation. However, in the first half of 2022, the US FDA approved the usage of DUPIXENT (dupilumab) — the first and the only biologic to show meaningful clinical data for eosinophilic esophagitis treatment in adults and pediatric patients 12 years and older. Further, by investigating the potential use of DUPIXENT in children with EoE aged 1–11, Sanofi/Regeneron could be the first pharma giant to mark its presence with a therapeutic asset catering to this age group.

As per Delveinsight’s analysis, the eosinophilic esophagitis treatment market is estimated to increase at a CAGR of 26% during the study period 2019–2032.

Besides a significant expected rise in prevalence, the emerging eosinophilic esophagitis treatment space shows potential with a couple of mAbs, apart from dupilumab, waiting in line for their approval in EoE. FASENRA (benralizumab; AstraZeneca/Kyowa Hakko Kirin) and cendakimab (Bristol Myers Squibb) are the two mAbs in late-stage clinical development. Further, a reformulation of fluticasone propionate—APT-1011 (Ellodi Pharmaceuticals) is also being investigated in Phase III eosinophilic esophagitis clinical trials. It has also received Fast Track Designation from the US FDA.

However, Takeda’s decision to discontinue launching Eohilia for EoE has been a game-changer for other eosinophilic esophagitis therapies. Takeda was the first to file for FDA approval, but the regulatory body issued a complete response letter mentioning that the drug could not be approved and recommended additional studies. This led to Takeda ceasing launch-related activities for Eoholia.

While Eohilia’s exit shifts the focus on other potential assets, APT-1011, being a similar asset (i.e., reformulation of fluticasone), is under the spotlight. Whether Ellodi’s APT-1011 will face a similar consequence or prove its safety and efficacy remains doubtful. If approved, APT-1011 will generate approximately USD 220 million by 2032, as per DelveInsight’s estimates.

What’s Ahead in the Eosinophilic Esophagitis Treatment Market?

Despite the favorable therapeutic effects of biologics, the approval of DUPIXENT, coupled with the promising biologics in the eosinophilic esophagitis pipeline, invites questions about their high costs. Understanding cost-effectiveness becomes paramount, along with providing proper patient access. Cost-effectiveness evaluations will help payers, providers, and policymakers in decision-making. Although biologics are expensive eosinophilic esophagitis treatments, they are likely to be more cost-effective when used as a part of precision medicine.  Moreover, a better understanding of the pathophysiology and mechanism of DNA instability and the impact of current eosinophilic esophagitis treatments on disease progression will help shape future clinical practice.

1. What is eosinophilic esophagitis?

Eosinophilic Esophagitis (EoE) is a chronic inflammatory ailment that is immune-mediated. It is characterized by an increased number of eosinophils infiltrating the esophagus, thus, impacting one’s fundamental eating ability.

2. What are the eosinophilic esophagitis symptoms?

3. How is eosinophilic esophagitis diagnosed?

4. What are the current eosinophilic esophagitis treatment options?

5. Which pharma companies are currently working in the eosinophilic esophagitis treatment domain?

FDA Approves Yescarta as a First CAR T-cell Therapy for Initial Treatment of R/R Large B-cell Lymphoma Until now, existing CAR-T therapies have been reserved for patients with blood cancer who have tried multiple treatments. The FDA has approved Yescarta, a CD19-directed CAR-T therapy developed by Gilead Science...

InnoCare Receives Go-ahead for Clinical Trial of TYK2 Inhibitor ICP-332 in China InnoCare, a biopharma firm developing novel therapies for the treatment of cancer and autoimmune diseases, today announced the approval of Phase I clinical trial of its novel TYK2 (Tyrosine Kinase 2) inhibitor, ICP-332, by the China... 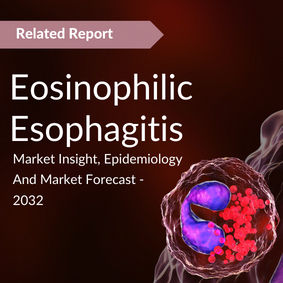