As per the Delveinsight, the total prevalent cases of Rheumatoid Arthritis in the seven major markets (i.e the United States, EU5 (the United Kingdom, Spain, Germany, Italy, France) and Japan) were observed to be 4,356,793 in 2017 which are estimated to rise during the study period (2017–2030). The United States, in 2017, accounted for the highest number of cases in the 7MM, i.e., 1,333,290 prevalent cases. Apart from this, among the EU5 countries, the highest number of prevalent Cases of Rheumatoid Arthritis was in Germany (in the year 2017).

As per the WHO, it is more common in women and in developed countries. Also, it reported that it affects the most productive years of adulthood, between the ages of 20 and 40. It severely affects the quality of life, and within ten years of the onset, at least 50% of patients in developed countries are unable to hold down a full-time job. Apart from disability, Rheumatoid Arthritis can lead to various emotional, social and economical impacts on the affected individual and their families.

What is the Main Cause of Rheumatoid Arthritis?

Even after several years of research, exact causes of Rheumatoid Arthritis are unknown, but some factors are believed that trigger the immune system to mistakenly send antibodies to attack the joints and the tissues surrounding them; which in turn results in pain and inflammation. Among various theories put forward by the researcher, bacteria, or a virus is one of the factors that trigger Rheumatoid Arthritis; however, it is not still proven.

Another interesting fact about Rheumatoid Arthritis affected people is that they tend to have higher levels of antibody (Rheumatoid Factor/RF) and anti-CCP antibody in their immune system. These antibodies are signs of hyperactive immunity.

What are the Risk Factors for Developing Rheumatoid Arthritis?

Several risk factors are considered that may increase the chances of developing Rheumatoid Arthritis. Some of the most common factors include:

Apart from these, obesity, diet, environmental factors are some additional risk factors for Rheumatoid Arthritis.

What are the Sign And Symptoms of Rheumatoid Arthritis?

The signs and symptoms of Rheumatoid arthritis may come and go. When the inflammation and other symptoms of the disease increase or get worse, it is called a flare. Similarly, when the symptoms (such as swelling and pain fade) get better, it is called remission.

What are the 4 Stages Of Rheumatoid Arthritis?

As Rheumatoid Arthritis progresses, it brings many changes in the body. The symptoms due to its progression, vary from stages to stage and also from person to person. Each of the stages follows different treatment goals.

Most people do not have any symptoms at this stage. However, they may feel joint pain, stiffness, or swelling. There is no damage to the joints; however, the joint lining (called the synovium) gets inflamed.

Inflammation of synovium caused damage to joint cartilage. People start experiencing pain which leads to a limited range of motion. The inflammation of the other body parts such as in the lungs, eyes, skin, and/or the heart also start. It is observed that in most of the cases, the Rheumatoid Arthritis advances into the second-stage of severity without being detected.

At this stage, the symptoms of Rheumatoid Arthritis become fully evident and start affecting the patient to a larger extent. The cartilage between the bones has worn away; people feel immense nerve pain, muscle weakness, swelling, and mobility problems.

At this stage, the inflammatory process ceases and joints no longer work. People experience immense pain, swelling, stiffness and lack of motion.

What are the Complications of Rheumatoid Arthritis?

Rheumatoid Arthritis apart from affecting the quality of life can lead to the risk of developing many other diseases. Some of the most common complications include:

Cardiovascular disease (CVD)/ Heart disease – Inflammation due to Rheumatoid Arthritis can affect the heart muscle in its surrounding areas which increases the risk of CVD such as cholesterol, diabetes, high blood pressure, heart attack and stroke. The joint pains can lead to less physical activities. The Rheumatoid Arthritis affected people are often advised to focus on risk factors that can affect the heart, such as smoking and lose weight.

Lungs – Rheumatoid Inflammation and scarring of the lung tissue can lead to pleurisy or pulmonary fibrosis which causes shortness of breath..

The Osteoporosis, Dry eyes and mouth, Lymphoma, and Carpal tunnel syndrome are some of the other complications of Rheumatoid Arthritis.

How is Rheumatoid Arthritis Diagnosed?

What Happens if Rheumatoid Arthritis is Left Untreated or if There is Delay in Treatment?

If left untreated it can cause chronic pain and disability. As per the Johns Hopkins Arthritis Center, the Rheumatoid Arthritis causes joint damage in 80% to 85% of patients, with the brunt of the damage occurring during the first two years of the disease. The risk of mortality also increased significantly with time. The chance for untreated people with Rheumatoid Arthritis to die is two times higher as compared with unaffected people with the same age if the disease remains untreated.

The medicine helps patients to relieve symptoms and also slow down the progress of the condition. The medicine basically consists of Disease-Modifying Antirheumatic Drugs (DMARDs) and Biologics Treatments. DMARD consists of methotrexate, leflunomidek, hydroxychloroquine, and sulfasalazine; DMARD is used to target inflammation,  reduces the progression and prevents joint deformity. The Biological treatments options include etanercept and infliximab. Supportive treatment includes physiotherapy and occupational therapy. Supportive treatment keeps the patient mobile and helps them to carry out their day to day activities. Apart from these dietary modifications, alternative treatment (home remedies), and physical exercise also play a vital role in the management of Rheumatoid Arthritis symptoms.

Which Companies are Working in the Rheumatoid Arthritis Treatment Market? 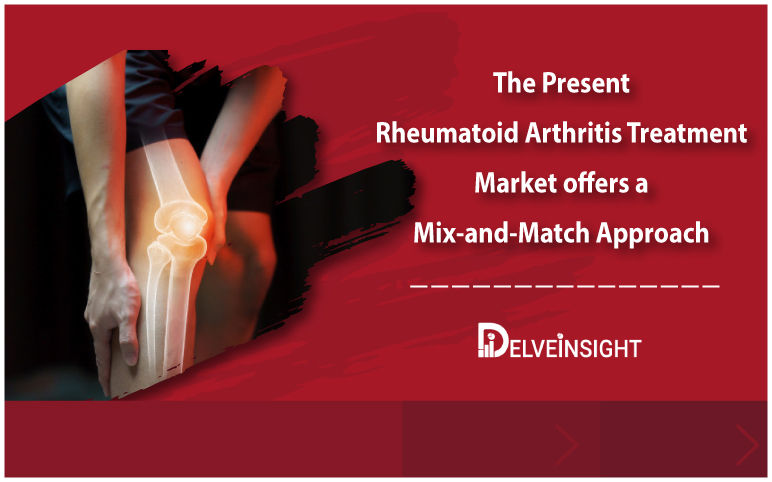 Beyond the shadow of a doubt, the Rheumatoid arthritis (RA) treatment market has witnessed strides of improvements du...