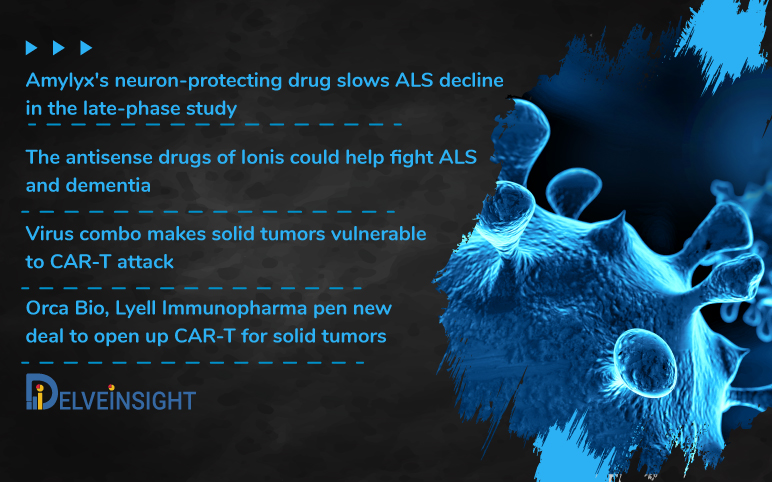 A novel combination of compounds has displayed that it can help decrease amyotrophic lateral sclerosis (ALS) by supporting the brain’s neurons’ inner workings.

After six months of treatment, AMX0035 of Amylyx Pharmaceuticals demonstrated a significant benefit compared to placebo, delaying the fast-acting neurodegenerative disease that robs the patient of their ability to talk, swallow, and eventually move and breathe.

The antisense drugs of Ionis could help fight ALS and dementia

Frontotemporal dementia (FTD) and amyotrophic lateral sclerosis (ALS) are two fatal neurodegenerative diseases marked by different clinical signs. However, they are believed to be caused by a common underlying mechanism that is a mutation in the C9orf72 gene, which leads to the toxic accumulation of the TDP-43 protein.

Now, the scientists at Mayo Clinic and the University of Pennsylvania provide further insight into the problem by throwing light on the function of another protein called poly (GR) in TDP-43 aggregation.

The researchers found that drugs called antisense oligonucleotides developed by Ionis Pharmaceuticals reduced TDP-43 and neurodegeneration in mice with mutated C9orf72, as reported in a new study published in Science Translational Medicine.

FDA-approved CAR-T cell therapies like Kymriah of Novartis’, target CD19, an antigen that is widely expressed in some blood cancers. However, these therapies are not useful for solid tumors treatment, most of which express like a wide variety of proteins that they lack one target. The solid tumors create an environment that is so hostile, making it difficult for CAR-T cells to survive, expand, and ward off cancer.

The scientists at the City of Hope informed that they have come up with a potential strategy for making CD19-targeted CAR-T cells function in solid tumors, and it involves an oncolytic virus.

The City of Hope team engineered an oncolytic virus to create a truncated version of CD19 in solid tumor cells. Their idea was that the antigen would travel to the tumor cells’ surface, making them targetable with CD19-directed CAR-T cell therapies. The combination worked in human cancer cells and mouse models.

Two Californian biotechs collaborate to break the barrier from blood to solid tumors in cell therapy. While being a significant hit in blood cancers for some patients, CAR-T has struggled in tumors, with several poor trial results over the years diminishing hopes it could translate its efficacy into a broader range of oncology targets.

A small but growing number of academic researchers and biotechs like Novartis are also getting in on the act, trying to tweak the use of cell therapies to work on tumors of the brain, kidney, and other targets.