Lung Cancer presents a heavy health and economic burden in Asia, being the most common form of cancer, with 60% of the world’s lung cancers being diagnosed there. Lung cancer is also present in more than 30% of non-smokers in Asia, specifically in adenocarcinomas, which is a subtype largely defined by oncogenic driver gene mutations. Compared to that, in western countries, only about 10% of lung cancer patients are non-smokers.

Mutation status is of relevance only in late-stage patients, where oncogenic mutations like EGFR and ALK are used as key biomarkers for the detection, treatment selection, and monitoring of patients. These mutations are assessed by doing comprehensive biomarker testing on the blood assay of patients. With about 70% of patients with NSCLC being diagnosed in later stages, these driver mutations have risen in prominence in the prognosis of late-stage patients.

There has been a Pan-Asian adaptation of the European Society for Medical Oncology (ESMO) guidelines, which was developed in collaboration with several Asian oncological societies like the Chinese Society of Clinical Oncology, Japanese Society of Medical Oncology, Korean Society of Medical Oncology, and others. These guidelines recommend first-line therapy with EGFR TKIs, although with no preference for any particular therapy. Although physicians prefer the allocation of first and second-generation therapies to patients before allocating them to resistance-specific third-generation therapies. They not only ensure patients’ treatment regimen are limited by resistance but also ensures the cost-effectiveness of their treatment.

In the second-line setting, the guidelines recommend TAGRISSO for patients testing positive for EGFR T790M mutation or those with central nervous system disease. Of note, the first and second-generation EGFR TKIs are reimbursed in all countries, and TAGRISSO is reimbursed only in China, Japan, and Korea. Although there has been a lack of therapies addressing exon 20 insertions acquired resistance in the Asian markets, the approvals of third-generation EGFR-TKIs that specifically target exon 20 insertions like RYBREVANT [Janssen] and EXKIVITY [Takeda] by the US FDA goes to show their arrival, and of similar therapies in the Asian markets soon.

TAGRISSO (Osimertinib) is a third-generation, irreversible EGFR-TKI. It was first approved in China in March 2017 and added to the National Reimbursement Drug List (NRDL) effective from January 2019 for the 2nd-line treatment of adult patients with locally-advanced or metastatic EGFR T790M mutation-positive NSCLC, whose disease has progressed on or after EGFR-TKI therapy. In September 2019, it was also approved as a first-line treatment for EGFR-mutated NSCLC and later included in the NRDL. Further, in April 2021, TAGRISSO became the only approved adjuvant treatment for patients with early-stage EGFR-positive cancer.

TAGRISSO has been quite a profitable asset for AstraZeneca, being used as a treatment option across various lines of treatment in Asia, and also attaining reimbursement for them, increasing its market access across various patient groups. Although TAGRISSO faced struggles in 2021 in China, having a 10% decline in sales till September in China; they expect to counter it by implementing a price cut. AstraZeneca expects the sales volume of TAGRISSO to increase, hoping for it to compensate for the price reduction they took to gain national coverage. Amidst all this, AstraZeneca still managed to achieve a revenue of 1,336 million USD in Emerging Markets from TAGRISSO, being their largest-selling product of 2021.

RYBREVANT is a bispecific antibody targeting EGFR and MET. It has two mechanisms of action:

In May 2021, it became the first targeted therapy approved by the US FDA for the treatment of NSCL patients with EGFR exon 20 insertion mutations who progressed from platinum chemotherapy. It is yet to gain approval in Asian markets, but Janssen is actively pursuing its developments there. Janssen is also pursuing the combination of amivantamab and lazertinib in EGFR-positive NSCLC patients who progressed on TAGRISSO.

For ALK mutations, standard chemotherapy is often used as the first line of therapy before EML4-ALK discovery.

Of these ALK-TKIs, only ENSACOV (ensartinib) is produced in China. It received its first National Medical Products Administration (NMPA) approval on December 2020, as a second-line treatment of choice for XALKORI (crizotinib) resistant patients of ALK-positive NSCLC, in China. In March 2022, the NMPA also approved ENSACOV as a first-line treatment of ALK-positive NSCLC.

The approval of ensartinib is set to have a significant impact on the treatment landscape of ALK-positive NSCLC, presenting itself as the most cost-effective option, when compared to other therapies. It was a cost-effective option compared with crizotinib, and was a dominant alternative to ZYKADIA (ceritinib) and ALUNBRIG (brigatinib); and although LORBRENA (lorlatinib) and ALECENSA (alectinib) were associated with prolonged survival compared with ensartinib, they were less cost-effective than ensartinib due to the overwhelming total costs. Pfizer’s LORBRENA (lorlatinib) was the first third-generation ALK inhibitor approved in China, on April 2022, for the treatment of ALK-positive advanced NSCLC.

Brain Metastasis seems to be quite common in EGFR-positive and ALK-positive NSCLC patients, developing in up to 50 to 60% of patients. And although the primary choice of treatment is radiation therapy in combination with first-gen EGFR or ALK TKIs due to its low-cost, second and third-generation TKIs are slowly replacing them due to their improved action on brain metastasis as well.

The treatment landscape for NSCLC has evolved substantially over the past few decades. With the availability of several targeted treatments, there is substantial improvement in survival, making NSCLC a chronic disease that patients can survive over the years rather than months. Patients also understand the need for multiple lines of targeted therapies as the tumour eventually mutates.

Non-small cell lung cancer (NSCLC) is the most common cancer, accounting for appro... 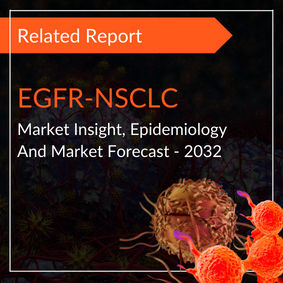