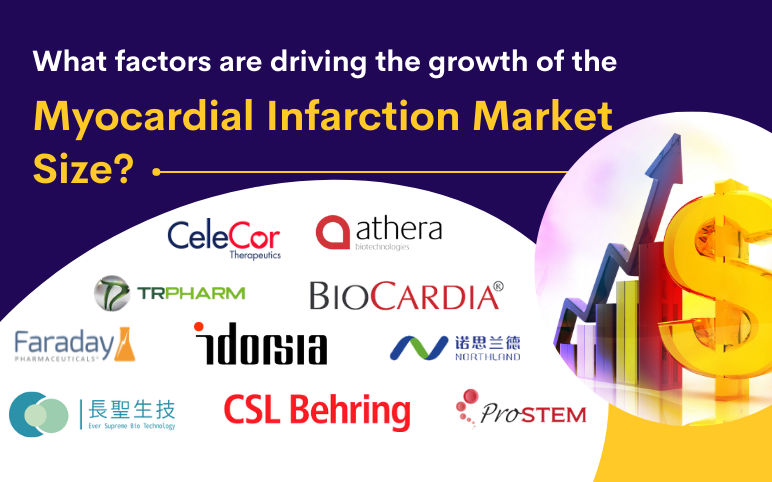 Increasing Incidence, Influx of Companies add to the Market Revenue in the Myocardial Infarction Market Space

Myocardial infarction is an irreversible death of heart muscles. It is pathologically referred to as myocardial cell death due to a prolonged lack of oxygen supply (ischemia). The condition is accompanied by chest pain that may appear as a sensation of tightness or pressure initially attributable to diminished cellular glycogen and relaxed myofibrils and sarcolemmal disruption that are a few of the first ultrastructural changes observed as early as 10–15 minutes after the onset of ischemia. It can also lead to sweating, nausea or vomiting, and fainting.

Myocardial infarction can go undetected or can also lead to catastrophic events, ultimately causing hemodynamic deterioration and sudden death. DelveInsight estimated that Myocardial infarction prevalence was approximately 13,123 in 2020, which is further expected to increase in the coming decade. The rise can be attributed to growing global cases of obesity and diabetes coupled with sedentary lifestyle habits. In the 7MM, the US had the highest diagnosed Myocardial infarction prevalent cases, with adults and the elderly at greater risk to suffer from the condition as compared to children and adolescents.

The present Myocardial infarction treatment market comprises Antiplatelet agents, Anticoagulants, Vasodilators, Beta Blockers, Lipid-lowering drug/ Statins, ACE inhibitors, ARBs (Angiotensin-II receptor Blockers), and Calcium channel blockers. The goal of the initial treatment is to offer relief from symptoms such as pain, immediate identification of ST changes via 12-lead EKG, initiation of reperfusion (if the patient is a candidate), and assessment and treatment of hemodynamic abnormalities. In a crux, the available pharmacologic treatments in the Myocardial infarction improve survival, decrease recurrent ischemic events, and provide symptomatic relief.

The current market has been segmented accordingly into different commonly used therapeutic classes based on the prevailing treatment pattern across the 7 MM, which presents itself with minor variations in the overall prescription pattern. Antiplatelet agents, Anticoagulants, Vasodilators, Beta Blockers, Lipid-lowering drug/Statins, ACE inhibitors, ARBs (Angiotensin-II receptor Blockers) and Calcium channel blockers are the significant classes that have been covered in the forecast model. However, the treatment for the condition remains challenging owing to the heterogeneity of the disorder compounded with the duration of treatment and modalities.

However, recent research demonstrated that pre-hospital thrombolysis, observed early after symptom onset in comparison/association with patients who had primary coronary intervention or elective primary coronary intervention, has a role in the management of patients and hence is being investigated to prevent cardiac arrest, large scale and limit the transition to heart failure and improve the survival rate. Further, a lot of novel pipeline candidates are under different phases of clinical evaluations expected to transform the outlook of the Myocardial infarction market in the coming decade. DelveInsight estimates that over 40 pharmaceutical companies are working and exploring more than 40 novel therapeutic targets to strengthen the Myocardial infarction pipeline. Some of the prominent players expected to leave the mark in the Myocardial infarction market space include CSL Behring, Idorsia, TRPHARM, ProSTEM, Ever Supreme Bio-Technology Co., Ltd., Faraday Pharmaceuticals, Athera Biotechnologies, CeleCor Therapeutics, BIOCARDIA, INC., Beijing Northland Biotech, Olatec Therapeutics, among several others.  Moreover, it was also estimated that the 7MM Myocardial infarction market revenue was worth USD 11,038 million in 2020, which is anticipated to increase by 2030.

Other factors fuelling the growth of the market size include rising global burden due to cardiovascular diseases in addition to a growing number of smokers, modifications in lifestyles that have led to an increase in the conditions such as obesity, diabetes, hypertension have added to the Myocardial infarction patient pool.

Although the high rates of clinical trials are some of the market-limiting factors that may hamper the growth of the Myocardial infarction market size in the forecast period. However, a surge in the acceptance of newer treatment technologies by developing nations and technological advances in healthcare are adding new dimensions to the growth of the Myocardial infarction market domain, and this coupled with the use of biomarkers for better diagnosis, increase in healthcare expenditure and a higher demand for cost-effective therapies are anticipated to push the growth of the market share in the coming next decade.