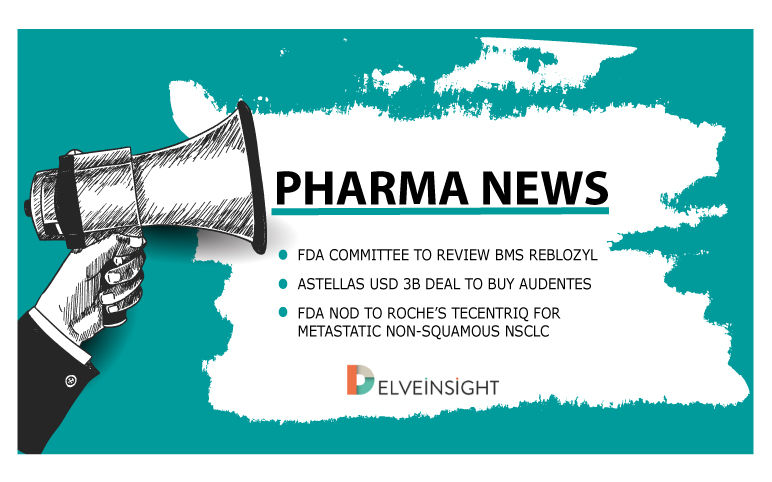 Bristol-Meyers Squibb and Acceleron Pharma have announced that US FDA committee will review BMS’s supplemental Biologics License Application (sBLA) for its Reblozyl in MDS.

Reblozyl ((luspatercept-aamt) has recently been approved by the regulatory authority to cure a rare type of blood disorder, Beta-thalassemia. Now, the companies are seeking to extend the approval of the therapy to treat adult patients with myelodysplastic syndromes (MDS)- in which bone marrow loses the ability to manufacture RBCs.

MDS is a rare form of the disorder that develops due to the inability of the bone marrow to produce mature blood cells. These blood cells remain in an immature status in the bone marrow. The disease, as per a study by NCBI, is sporadic in people below the age of 40 years. The incidence increases to five times in population with the age group 60-80 years. Moreover, MDS afflicts male more as compared to females.

The drug will undergo the reviews for very low- to intermediate-risk of MDS-associated anaemia with patients who have ring sideroblasts and need red blood cell (RBC) transfusions. However, the patients who require urgent correction of anaemia are not administered with Reblozyl.

BMS has acquired the drug from Celgene last month.

Roche has announced a positive recommendation from the US FDA for its Tecentriq (atezolizumab) in combination with chemotherapy for the treatment of NSCLC.

The approval of the Tecentriq-based combination therapy came after the results from phase III IMpower130 study were announced. The therapy helped people by improving quality of living significantly as compared to only chemotherapy.

Moreover, the combination therapy also helped in reducing the risk of worsening of the disease and death rates. The therapy was able to show consistent safety profiles.

The therapy has been approved for the initial (first-line) treatment of adults with metastatic non-squamous non-small cell lung cancer (NSCLC) with no EGFR or ALK genomic tumour aberrations. The drug player is extensively conducting trials to explore the abilities and test the potential of its drug Tecentriq. Roche has around nine phases III studies underway for indications like different types of lung cancer and several other across the skin, breast, gastrointestinal cancers and others.

Astellas Pharma has joined the race with several other pharma players to develop genetic therapies by purchasing Audentes Therapeutics for USD 3 Billion.

Through the Audentes buyout, Astellas is aiming to bolster up its pipeline of genetic medicines for rare neuromuscular diseases.

The deal will enable Astellas to acquire Audentes’ investigational drug, AT132, which is under development to cure a rare genetic neuromuscular disorder Duchenne muscular dystrophy.

Duchenne muscular dystrophy (DMD), according to the National Centre for Advancing Translational Sciences, is a progressive form of muscular dystrophy that occurs primarily in males, though in rare cases may affect females too. DMD results in severe muscle weakness and respiratory failure, along with affecting memory and communication skills.