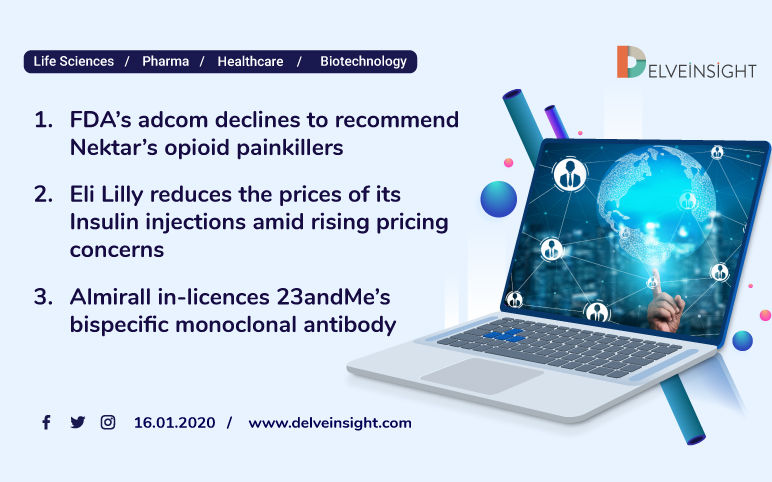 The US FDA has voted down Nektar Therapeutics’ opioid painkiller NKTR-181, designed to treat lower back pain.

The FDA’s Anesthetic and Analgesic Drug Products Advisory Committee and the Drug Safety and Risk Management Advisory Committee unanimously has decided not to recommend the use of the painkiller, taking into account the opioid addiction.

NKTR-181 (loxicodegol), a novel mu-opioid agonist, was designed to work on the brain by entering into the cells slowly, with the company emphasizing on its ability to decrease the abuse. The company argued that by slowing down, the rate of the drug entering into cells would help to relieve pain without causing euphoria.  However, the argument failed to please the committee members. The committee feared the misuse and overuse of the opioid painkiller in the US where the problem of increasing opioid addition already prevails.

After the setback, the company has withdrawn from investing into the development of the drug further to save on the cost factor which would lead to saving from USD 75 Million to USD 1.25 Million in the following year. Consequently, the shares of the company also plunged by 14.5%.

Eli Lilly has announced to sell Humalog Mix75/25 KwikPen and Humalog Junior KwikPen at rates half than their actual price.

In its aim to make available cheaper Insulin to people, this is the second time, after it decided to do the same with its widely-used Humalog injection– Lispro. Both the insulin products will now be sold at rates 50% cheaper than the price of branded versions.

With the spur in diabetes prevalence and concerns over rising prices of insulin and other prescription drugs, the decision of the company to reduce the costs was somewhat expected. Recently, Nordisk and Sanofi also announced to lower down the price of their Insulin drug. However, the pharma players argue that the listed prices of the drugs are high due to the high cost of drug-making, and discounts and rebates paid to the insurers and healthcare managers.

23andMe has formed a collaboration with the Almirall, Spanish biotech for the development of its first drug.

The company, 23andMe, focuses on developing an array of genetic test kits, which can be used without any medical supervision.

Through the deal, Almirall will gain exclusive rights to develop and market 23andMe’s bispecific monoclonal antibody. The antibody is designed to target three different forms of the inflammatory cytokine, interleukin-36 (IL-36), indicated to treat people with severe psoriasis.

The companies plan to advance for immune-dermatology therapy market and address the present unmet clinical needs. It would not be easy for 23andMe to enter into an already crowded psoriasis market with pharma giants like AbbVie, Johnson & Johnson, Eli Lilly, Amgen and many others occupying the significant chunk of the market. However, the company has a huge potential to fuel drug discovery with the help of its R&D.