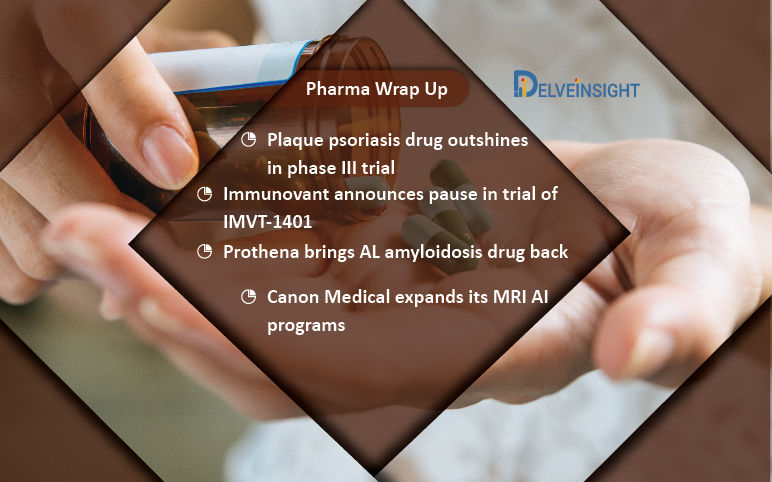 The study, known as POETYK PSO-2, trialled the drug, deucravacitinib, against placebo and Otezla in 1,020 patients with moderate to severe plaque psoriasis as per announced by the company. After 16 weeks of treatment, remarkably more patients taking Bristol Myers’ drug than placebo had a 75% depletion of psoriasis area and severity and clear or almost transparent skin as measured by the static Physician’s Global Assessment, a visual evaluation of psoriasis.

The company displayed broad strokes with plans to show complete data at a future medical meeting. The news comes three months after Bristol Myers reported a similar performance in the 666-patient POETYK PSO-1 study, in which deucravacitinib also outperformed placebo and Otezla.

Immunovant announces pause in a clinical trial of IMVT-1401

Immunovant, a clinical-stage biopharmaceutical company focused on enabling everyday lives for patients with autoimmune diseases, announced a voluntary pause of dosing in its ongoing clinical trials for IMVT-1401.

The company has become aware of a physiological signal comprising elevated total cholesterol and LDL levels in IMVT-1401-treated patients in ASCEND GO-2, a Phase 2b trial in Thyroid Eye Disease (TED). Cholesterol levels were not measured in prior clinical trials of IMVT-1401 in Myasthenia Gravis (MG) and healthy participants. Out of caution, the company has decided to voluntarily pause dosing in ongoing clinical studies in both TED and Warm Autoimmune Hemolytic Anemia to apprise patients, investigators, and regulators as well as to modify the monitoring program.

ASCEND GO-2 is a randomised, placebo-controlled trial in TED evaluating different doses, each given weekly for 12 weeks. In this study, cholesterol parameters are evaluated at baseline, twelve weeks, and week 20 following eight weeks off drug. Based on preliminary, unblinded data from about 40 patients through week 12, mean LDL cholesterol at week 12 increased by approximately 65% in the 680mg dose group, by approximately 40% in the 340mg dose and did not increase in the control group. Average HDL and triglyceride levels increased to a much lesser degree. For context, commercially available statins report a reduction in LDL cholesterol between 27-60%. At the twenty-week timepoint, average LDL levels had declined to baseline or lower in the 680mg dose group, the 340mg dose group, and the control group. No serious cardiovascular events have been reported to date in IMVT-1401 clinical trials.

Prothena brings AL amyloidosis drug back to the clinic

Prothena canned its AL amyloidosis program in 2018 after it flunked a mid-stage trial and a data monitoring committee regarded a separate phase 3 study doomed to flunk. Now, the biotech is reviving the program after analysing the phase 3 data found the drug benefited the sickest patients to live longer.

That study labelled VITAL, examined the drug, called as birtamimab or NEOD001, against the standard of care in 269 patients with AL amyloidosis, short for amyloid light-chain amyloidosis. After finishing the study for futility, Prothena crunched the data and observed that the sickest patients, those whose disease was classed as Mayo stage 4 at the start of the study, did significantly better birtamimab than on placebo.

At the nine-month mark, the analysis received nearly three-quarters of the sickest patients on birtamimab were still alive as compared to about half of the sickest patients receiving placebo (74% versus 49%). These numbers are from just 77 patients or 30% of the total patients in the trial, but they have convinced Prothena and the FDA that there is a potential in this drug in these patients.

Canon Medical is expanding the clinical reach of its artificial intelligence programs designed to enhance MRI image quality, announcing that it can now be used in 96% of all scanning procedures.

The company’s Advanced intelligent Clear-IQ Engine, or AiCE, aims to sharpen scans taken by lower-dose, 1.5 Tesla MRIs, to bring their image quality up to par with 3.0 Tesla machines.

Jonathan Furuyama, managing director of Canon Medical’s MR business unit, said in a statement that in today’s environment, making images easy to grasp and acquire is more vital than ever, and this is the recent demonstration of their commitment to offering accessible AI that clinicians can utilise to make the most significant impact on patient care.