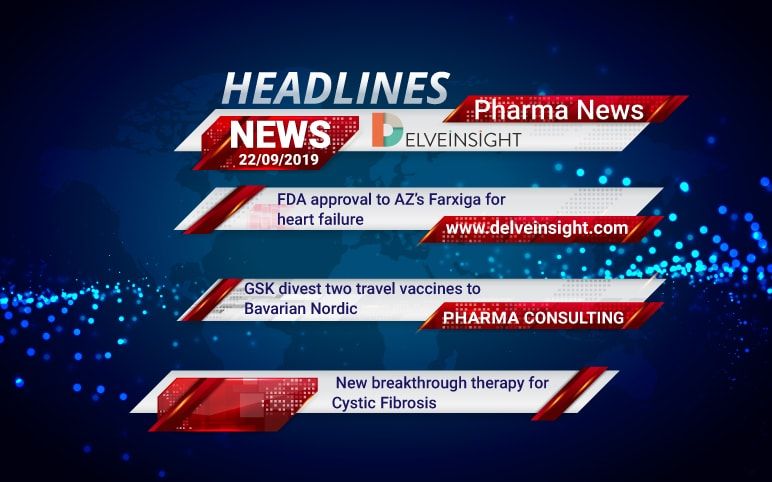 The US FDA today has given its nod to Trikafta (elexacaftor/ivacaftor/tezacaftor) of Vertex Pharmaceuticals, the first of its kind triple combination therapy for the patients with cystic fibrosis.

The drug, Trikafta, has been approved for patients of age 12 years and older who have at least one F508del mutation in CFTR (cystic fibrosis transmembrane conductance regulator) gene, which mostly affects 90% of all the cystic fibrosis population.

Cystic fibrosis is a rare, progressive, genetic disease known to affect more than 30,000 people in the US, as per Cystic Fibrosis Foundation Patient Registry estimates.

The Cystic fibrosis therapeutics market is mainly comprised of the following type of therapies: Mucolytics, Bronchodilators, Antibiotics, and CFTR Modulator therapies. Mucus thinners or mucolytics are medications that cause thinning of the mucus thereby making it easier to cough it out of lungs.

In January 2012, ivacaftor (Kalydeco) was approved by the FDA as the first drug that treats the underlying cause of Cystic Fibrosis (CF). Kalydeco represents a major advance in the treatment of Cystic Fibrosis for people with a specific type of this disease.

Vertex Pharmaceuticals has also developed a combination therapy of lumacaftor/ivacaftor (Orkambi) which is used to treat patients carrying two copies of F508del mutations. Symdeko (tezacaftor/ivacaftor) is also one of the Cystic fibrosis treatment options developed by the same company.

GlaxoSmithKline has recently announced to off-load two of its travel vaccines to Bavarian Nordic in an upfront payment of USD 336 Million.

Rabipur is a vaccine containing inactivated rabies virus given to people who are at risk of developing rabies. It also is equally effective if administered immediately after the animal bite suspected to have rabies. On the other hand, Encepur is a vaccine designed against tick-borne encephalitis for people of age above 12 years.

According to the GSK’s annual report, every day around 770 million vaccine doses is administered. The annual turnover of the company last year due to their vaccine segment was around USD 5.9 Million.

AstraZeneca has announced the FDA recommendation for its Farxiga (dapagliflozin) as it can reduce the risk of hospitalization due to heart failure.

The approval is based on the basis of results of the trial DECLARE-TIMI 58 CV whose subjects were the patients suffering from Type-2 Diabetes and established cardiovascular disease or multiple cardiovascular risks.

Earlier, the therapy was in the market indicated as monotherapy and combination therapy to lower down the blood sugar level.

According to the CDC, more than 30 million people are living with diabetes and around 90% of them have type 2 diabetes. Moreover, an estimated number of 24.8 people per 100,000 died due to diabetes-related causes.