Alzheimer's drug fails! Is it time to move on? | DelveInsight Skip to main content 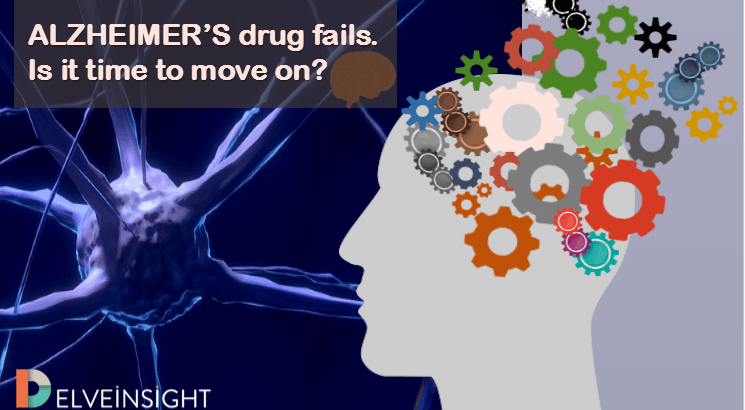 Alzheimer’s is one of the diseases which are irreversible and untreatable. With causes still unknown adds to the further conundrum.  But for more than two decades now Scientists from everywhere have been working on the “amyloid hypothesis“. It has been a long-standing theory that brains of the people affected with Alzheimer’s disease have clumps of amyloid-β (Aβ) in the forms of senile plaques deposited in the brain tissues. These Aβ-peptide gets released into the space between brain cells after the enzymes β-secretase and γ-secretase cleaves off Amyloid precursor protein (APP) present within the cell giving rise to amyloid- β fragments.

And, now the news of halting of two Phase 3 clinical trials of Aducanumab, meant to attack Alzheimer, by Biogen and its Japanese partner Eisai has crushed the hopes of beating the memory-destroying disease. All the drugs so far developed to target amyloid-β like Eli Lilly’s solanezumab, Pfizer’s bapineuzumab, and Merck’s BACE inhibitor failed miserably during their clinical trials. For Aducanumab it was altogether a different story not to be missed it was the most propitious candidate among the others. With zero to only a little failure in previous trials, it was the most looked-after as the company was running its simultaneous two Phase III trials. The decision to halt the trial did not come out of any safety concern but due to the zero results in Phase 3.
The news of Aducanumab being dead affected Biogen’s stock as it dropped by a whopping 30% wiping off more than USD 18 billion. Biogen had considered it an upcoming gem of a drug not because of unmet medical need and huge market size but also because it could be a major key-driver. With biogen’s stock what crashed is the hope of millions of patients and families affected by Alzheimer.

The failures here do confirm the complex nature of the disease in question. It might look like the amyloid hypothesis has failed. But Biogen and Eisai haven’t relinquished yet. Eisai has started to move forward with Phase 3 trial of its another Alzheimer’s drug BAN2401. The failure of drugs to attack amyloid-β doesn’t in any way meant that the hypothesis is false. And the new focus will be on testing the people who are still well. The diagnosis of Alzheimer even when the mild symptoms are visible is still too late to target amyloid-β as the by then the build of amyloid would have led to the formation of tau-containing neurofibrillary tangles killing more brain cells. So focus on an early diagnosis is what is required looking at the current scenario of the disease.