Behcet’s syndrome is an uncommon multisystem inflammatory ailment marked by ulcers in the mouth and genitalia, different skin lesions, and eye abnormalities. It is linked to several new clinical symptoms, all caused by an underlying vasculitis that affects arteries of all diameters.

The HLA-B*5101 allele of HLA-B51 and other non-HLA genes are linked to Behcet’s syndrome. Patients from these regions have more comparable clinical characteristics than patients from the west, whose condition has a weaker connection with HLA antigens. Although familial Behcet’s syndrome is rare and has a clear pattern of inheritance, 15% of affected children have the familial condition.

As per the DelveInsight assessment, in 2021, the total diagnosed prevalent cases of Behcet’s syndrome was more than 69K in the 7MM. The highest number of cases was seen in Japan.

The apex of the Behcet’s syndrome treatment landscape

The Behcet’s syndrome treatment market was valued at around USD 94 million in 2019 and is expected to reach USD 270 million by 2032, growing at a CAGR of ~10% during the study period.

Corticosteroids are used to treat inflammation, azathioprine is recommended in patients with recurrent arthritis, and glucocorticoids are considered during acute exacerbations. OTEZLA is the first US FDA-approved Behcet’s syndrome therapy to treat oral ulcers associated with Behcet’s syndrome. REMICADE (infliximab) and HUMIRA (adalimumab) are incorporated to treat refractory uveoretinitis in Behcet’s and intestinal Behcet’s disease.

Early Behcet’s syndrome diagnosis continues to be extremely difficult without a reliable biological marker and an exact diagnostic test. Due to the insufficient scientific evidence and few cases reported leading to no prospective Behcet’s syndrome clinical trials, it presents a hurdle in developing new treatment modalities. Access to medicines that can effectively treat specific illness presentations remains a key barrier due to the lack of sizable randomized controlled clinical studies to examine the impact of various interventions in Behcet’s syndrome.

Behcet’s syndrome treatment procedures for the vascular, neurologic, and gastrointestinal association are mostly founded on uncontrolled investigations. In this manner, future RCTs and multicenter observational examinations in these fields must further develop proof levels for treatment proposals in these areas.

Key developments in the Behcet’s syndrome treatment space so far

Another impediment to researching potential new and existing therapies is a lack of understanding of Behcet’s syndrome pathogenesis. While there is a large body of literature on the possible mechanisms of Behcet’s syndrome, understanding whether these are influenced by environmental, genetic, or other factors is still very limited. Due to the disease’s complexity and multisystem involvement, a holistic approach to management with the involvement of specialists is required.

The optimistic future of the Behcet’s syndrome treatment market

As Behcet’s syndrome demands more advancements to bridge the gap between research and Behcet’s syndrome treatment, more interventional studies are required to understand the disease and establish treatment options. According to research articles, Behcet’s syndrome is widespread along the old Silk Road, which extends from eastern Asia to the Mediterranean, but because of the migration of Turks to Germany and other European nations, it might encourage research into the condition.

1. What is Behcet’s syndrome?

Behcet’s syndrome is an uncommon multisystem inflammatory ailment marked by ulcers in the mouth and genitalia, different skin lesions, and eye abnormalities. It is linked to several new clinical symptoms, all caused by an underlying vasculitis that affects arteries of all diameters.

2. What are Behcet’s syndrome symptoms?

3. How to diagnose Behcet’s syndrome?

There are no specific tests or biomarkers that can confirm a Behcet’s syndrome diagnosis. Clinical criteria, the occurrence of disease signs and symptoms, and positive clinical criteria are referred to as the International Study Group (ISG) criteria for Behcet’s disease.

4. What are the current Behcet’s syndrome treatment options?

The only therapy approved by US FDA is OTEZLA (apremilast) for treating oral ulcers associated with Behcet’s syndrome. In Japan, REMICADE (infliximab) and HUMIRA (adalimumab) are approved for refractory uveoretinitis in Behcet’s disease and intestinal Behcet’s disease; however, several off-label therapies, such as colchicine, corticosteroids, azathioprine, anakinra, canakinumab, secukinumab, and ustekinumab, are used for the management of Behcet’s syndrome.

HUMIRA Biosimilars in the US: The Talk of the Psoriatic Arthritis Treatment Market

Psoriatic arthritis (PsA) is a type of chronic inflammatory arthritis that affects approximately 1 in every 10 people with psoriasis. According to the National Psoriasis Foundation, psoriasis is most common in adults aged 30 to 50. However, psoriatic arthritis can develop at any age, including children. Accordin...

Sandoz Launches generic Revlimid in 19 European Countries, Bringing a Flood of Competition to BMS' Megablockbuster Since Bristol Myers Squibb acquired Celgene and its megablockbuster Revlimid, the company has been bracing for the day when the multiple myeloma superstar would face generic competition. Sandoz, a s... 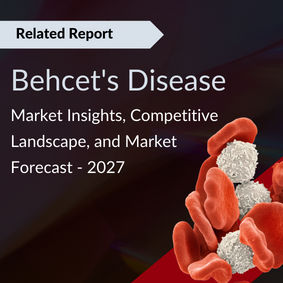 Analyzing the Growth of the Biosimilar Market Through Years