Non-alcoholic fatty liver disease is one of the most common causes of liver disease in the United States. As per the National Institute of Diabetes and Digestive and Kidney Diseases, only a small number of NAFLD patients possess NASH. It is estimated that about 24% of U.S. adults have NAFLD, among which around 20%-25% of adults suffer from NASH. NASH is highly related to obesity; therefore, 75% of NASH patients are overweight, and 90% are obese.

As per DelveInsights analysis, amongst five stages, the highest number of patients diagnosed with NASH belongs to stage F1 and the lowest to the F4 stage.

Currently, the pipeline of NASH treatment market consists of a great deal of drugs. FXR Agonists, FGF21 Stimulants, FGF19 Analog, Glucagon-like Peptide-1 (GLP-1) Agonist, Peroxisome Proliferator-activated Receptor (PPAR) Regulators, THR-β Agonists, and some others are the most highlighted class of this indication. Ongoing research and current trials have the potential to change the market.

Lanifibranor, a lead product of Inventiva Pharma, is an orally-available small molecule that induces anti-fibrotic, anti-inflammatory, and beneficial metabolic changes in the body by activating each of the three PPAR isoforms, known as PPARα, PPARδ, and PPARɣ. These isoforms play essential roles in regulating cellular differentiation, development, and tumorigenesis. The company has started recruiting for phase III clinical trials.

Semaglutide, a lead product of Novo Nordisk NASH pipeline, also a GLP-1 analog indicated for T2D, is under evaluation for both weight management and NASH treatment and has been shown to significantly reduce alanine aminotransferase (ALT) and high sensitivity C-reactive protein (hsCRP) in a dose-dependent manner in patients with obesity or T2D in its clinical trials.

Tirzepatide, sponsored by Eli Lilly and Company a once-weekly dual glucose-dependent insulinotropic polypeptide (GIP) and glucagon-like peptide-1 (GLP-1) receptor agonist that integrates the actions of both incretins into a single novel molecule. The company has started recruiting for its phase II clinical trial. Mounjaro (tirzepatide) for adults with type 2 diabetes was approved by the FDA and received a positive opinion from the European Medicines Agency’s Committee for Medicinal Products for human use.

TERN-501, produced by Terns, Inc., is a thyroid hormone receptor beta (THR-β) agonist with high metabolic stability, enhanced liver distribution, and greater selectivity for THR-β compared to other THR-β agonists in development for use in fixed-dose combinations for NASH treatment. It has also received Fast Track designation from the FDA for TERN-501 for the treatment of NASH in June 2021.

Obeticholic acid (OCA) developed by Intercept Pharmaceuticals, is a modified, synthetic bile acid that acts as a farnesoid X-activated receptor (FXR) agonist. Farnesoid X-activated receptors are primarily expressed in human enterocytes and hepatocytes and naturally occurring bile acids that are most often the ligands for FXRs. It is developed primarily to treat liver and bile duct pathologies. Currently, OCA has approval from the FDA to treat primary biliary cholangitis (PBC). It is being studied in Phase III.

Pegozafermin engineered by 89bio, Inc. using a proprietary glycoPEGylation technology to prolong the biological activity of FGF21 while maintaining the efficacy of native FGF21. FGF21 is an endogenous metabolic hormone that regulates energy expenditure, glucose, and lipid metabolism. The company has initiated Phase II clinical trials to evaluate the efficacy, safety, and tolerability of NASH.

Efruxifermin (EFX), a lead product of Akero Therapeutics, Inc, is a differentiated Fc-FGF21 fusion protein that has been engineered to mimic the balanced biological activity profile of native FGF21. EFX is currently being evaluated in two Phase IIb clinical trials in patients with biopsy-confirmed NASH: the HARMONY study in pre-cirrhotic patients with F2-F3 fibrosis and the SYMMETRY study in cirrhotic patients with compensated F4 fibrosis.

HU6, sponsored by Rivus Pharmaceuticals, Inc., is a controlled metabolic accelerator (CMA) that provides a novel, measured approach to activating proton leak and mitochondrial uncoupling, a natural process in the body that regulates and dissipates energy. The drug has completed its Phase IIa trials.

What’s Ahead in the Nonalcoholic Steatohepatitis Treatment Market?

Nonalcoholic steatohepatitis can further worsen to cause cirrhosis, hepatocellular carcinoma, and other diseases. The majority of NASH patients do not show any symptoms. Therefore, the development of screening strategies in order to identify individuals at high risk remains a highly unmet need. Moreover, some noninvasive tests precisely predict disease proliferation and progression as part of the natural history of NASH or the decrease in response to treatment are urgently needed to decrease the reliance on repeat liver biopsies.

As there are no FDA-approved medications so far that can resolve NASH and decrease fibrosis, several market players are working to develop therapies, and the anticipated launch of these therapies will change the NASH treatment market dynamics in the coming years.

What are the most promising NASH drugs which can change the treatment outlook?

Lanifibranor, Tirzepatide, Vonafexor are some of the most promising pipeline therapies that can change the dynamics of the treatment market.

Which is Merck’s potential therapy in the NASH treatment pipeline?

MK-6024 is a novel drug in the Merck NASH pipeline that is currently being studied in Phase II clinical stage and can change future treatment paradigms.

How is NASH diagnosed?

Liver biopsy is the only test that can prove a diagnosis of NASH and show clearly how severe the disease is. Liver biopsy can show fibrosis at earlier stages than elastography.

AstraZeneca’s Danicopan Shows Positive Results in Phase III Trial Danicopan, an oral Factor D inhibitor developed by AstraZeneca, was expected to fail a phase II trial in rare kidney disease in 2020, but a new readout could revive the drug. Danicopan (ALXN2040) has demonstrated efficacy as an adjunct treatment f...

A New Dawn for CRISPR, Intellia Edits Cells Inside the Body Intellia Therapeutics, along with its partner Regeneron Pharmaceuticals, recently announced its successful attempt in editing the cells inside the body leveraging the CRISPR technique. The world’s first-ever trial that has their DNA edited through an in... 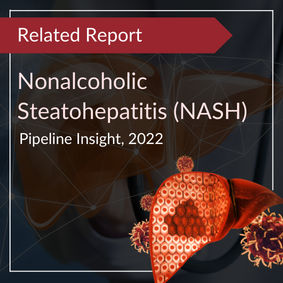