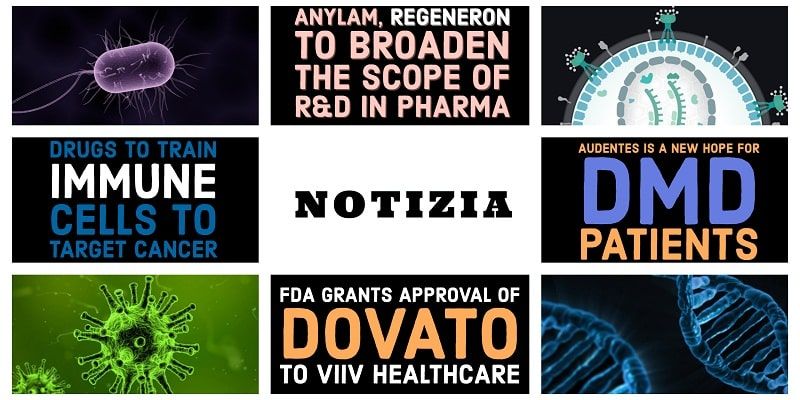 Anylam, Regeneron to broaden the scope of R&D in Pharma

Alnylam in collaboration with Regeneron is expanding its research on NASH. Regeneron with the capability of generating various targets via antibody approach is going to get infused with USD 800 million upfront. The joint deal will help in expanding R&D and reaching the extracellular targets. Although priority will be on testing a combination of , Regeneron’s C5 antibody in Phase 1 trial and , Alnylam’s RNAi anti-C5 therapy, now in Phase 2.

Researchers at Mount Sinai School of Medicine in New York, have positive outcomes that FDA approved approaches for CAR-T. It involves directly removing the T-cells from patients that can be used to target cancer. This approach to train immune cells to hunt down the cancerous cells via “in-situ vaccination” will be open for not only treating Lymphoma, Neck cancer but also Breast cancer. The Vaccination consists of two drugs which will be administered at the tumour site.

Audentes is a new Hope for DMD patients

Audentes Therapeutics-a California based Biotechnology company, has started to accelerate the production of a muscle-repair protein whose deficiency is the primary cause of Duchenne muscular dystrophy (DMD). Duchenne is one of the most competitive areas, and Audentes doesn’t want Sarepta’s Exondys 51 to monopolise the market. The collaboration with the Nationwide’s Children Hospital in Columbus, Ohio, focuses on the approach to stimulate a version of the protein- dystrophin, missing in DMD patients due to mutations in genes.

The U.S. Food and Drug Administration (FDA) recently has given thumbs-up to a combined therapy of Dovato, submitted by ViiV healthcare, which comprises two drugs and lamivudine. The new regimen approved will be effective to treat patients infected with HIV who have never received the treatment before to take the drugs in a sing tablet.