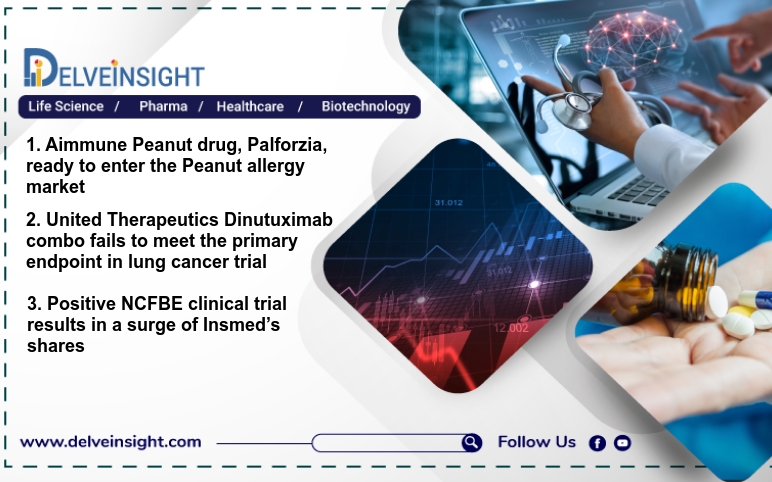 The US FDA has given its recommendation to the Aimmune Therapeutics’ drug, Palforzia, the first-ever treatment for Peanut Allergy.

Palforzia is an oral immunotherapy, set to address the unmet needs in the Peanut market, reducing the incidence and severity of allergic reactions, including anaphylaxis, which may occur due to accidental exposure to peanut.

Peanut allergy is one of the most common allergies among infants and young children, with a total Peanut allergy prevalence 8,640,527 in 2017, in the 7MM, estimates DelveInsight.

The therapy, Palforzia, is designed to increase the tolerance of peanut, desensitizing the patients over time. With the approval, Aimmune Therapeutics will stay six months ahead of its competitor DBV technologies, which is manufacturing a patch-based therapy for treating peanut allergy.

United Therapeutics has announced the failure of its Unituxin (dinutuximab) with irinotecan combo to meet primary endpoint.

The trial Phase II/III – DISTINCT, was evaluating the combination of Unituxin (dinutuximab) with irinotecan compared to irinotecan or topotecan alone in relapsed or refractory small cell lung cancer (SCLC).

Small cell lung cancer accounts for 15% of total cancer with a higher preponderance in males as compared to females in the 7MM.

Already approved in combination with granulocyte-macrophage colony-stimulating factor (GM-CSF), interleukin-2 (IL-2) and 13-cis-retinoic acid (RA), Unituxin, is a GD2-binding monoclonal antibody, for the treatment of children with high-risk neuroblastoma.

The company’s stock is up more than 36% in early trading today.

At present, there are no currently approved treatments or therapies, giving INS1007 an edge in the market targeting NCFBE.