Need of the Hour: Enhanced Strategies for PD-LID Treatment and Management

Parkinson’s disease (PD) is a degenerative neurological condition primarily affecting middle-aged and older adults and is characterized by tremors, muscular rigidity, and slow, clumsy movement. It is connected to the brain’s basal ganglia atrophy and a lack of the neurotransmitter dopamine. Levodopa is considered a linchpin despite the availability of other agents for reducing the symptoms of Parkinson’s disease. However, prolonged levodopa usage can lead to levodopa-induced dyskinesia (LID).

As per a study by Jose (2000), Parkinson’s disease is an age-related neurodegenerative disorder with an average onset age of 60. In the United States, approximately 1 million people suffer from Parkinson’s disease, and there are 60,000 newly diagnosed cases every year. After 5 years of PD-LID treatment, >50% of patients experience motor fluctuations and dyskinesias.

Are the shortcomings answered for PD-LID treatment?

Due to the unclear pathomechanism, PD-LID management remains a matter of concern as the current strategies revolve around dopamine stimulation, levodopa-sparing strategies, and nondopaminergic add-ons. Though therapies like GOCOVRI (PD-LID) and NOURIANZ (wearing off) are available for PD-LID management, none improve daily living activities, enhance the quality of life, or decrease caregiver burden. Furthermore, the appearance of levodopa-induced dyskinesia in Parkinson’s disease patients creates an additional economic burden. Compared to patients without levodopa-induced dyskinesia, those with levodopa-induced dyskinesia have a 78% increase in PD-related treatment expenses and a 29% increase in overall treatment costs. Hence, advancements are required for PD-LID treatment that pave the way for potential therapies to enter the PD-LID treatment market.

The PD-LID market was valued at around USD 1,400 million in 2019 and is expected to reach USD 2,300 million by 2032, growing at a CAGR of 3.6% during the study period. KETARX (PharmaTher), NLX-112 (Neurolixis SAS/Gala laboratories), JM-010 (Bukwang Pharmaceutical/Contera Pharma), AV-101 (Vistagen), Mesdopetam (Ipsen Pharma), XADAGO (Newron Pharmaceuticals/Zambon Pharmaceuticals) and CPL500036 (Celon Pharma SA) are investigating their respective candidates for PD-LID treatment and management in the 7MM. Several late-stage assets with distinct MoA are being developed to treat PD-LID patients and are expected to enter the 7MM PD-LID treatment market in the next few years.

Can gene therapy be the silver lining for the PD-LID treatment landscape?

As PD-LID demands more advancements to bridge the gap between research and PD-LID treatment, more studies are being conducted to understand the disease and establish PD-LID treatment options. Research is underway to understand whether the specific calcium channel in the brain results in dyskinesia; however, it is unknown if blocking or silencing this channel can reduce dyskinesia. The experimental model of PD-LID has shown promising results using gene therapy, which enables new genetic information to reduce the number of channels. The positive results from the preliminary data have established a belief that ‘gene silencing’ could relieve the symptoms of PD-LID and potentially slows the disease progression. Given the favorable preliminary data, the gene therapy approach could be a boon for PD-LID patients.

What’s ahead in the PD-LID treatment market?

1. What is LID in Parkinson’s?

LID is a type of dyskinesia caused by the drug levodopa (l-DOPA), which is used to treat Parkinson’s disease. It frequently includes hyperkinetic movements such as chorea, dystonia, and athetosis. There are three clinical variants of PD-LID: peak-dose dyskinesia, off-period dystonia, and diphasic dyskinesias; they commonly present as chorea or choreoathetosis, but myoclonus, akathisia, ballism, and other abnormal movements have also been described.

2. What are the Parkinson’s disease symptoms?

3. What are the current Parkinson’s disease treatment options?

Levodopa is the most effective Parkinson’s disease treatment; however, long-term use is complicated by LID, which disables motor fluctuations and involuntary movements. Despite significant progress, the pathogenesis of LID remains unknown. There are currently no validated, quantitative, or qualitative diagnostic techniques to assess the emergence and progression of LID in Parkinson’s disease patients.

4. How many pharma companies are working in the PD-LID treatment market?

Genentech’s gantenerumab Fails in Phase III Trial for Alzheimer’s Disease In yet another setback for an amyloid-targeting drug, Roche's Genentech division has reported disappointing top-line results from its highly anticipated phase III trial of gantenerumab in early Alzheimer's disease. The failure is entirely ... 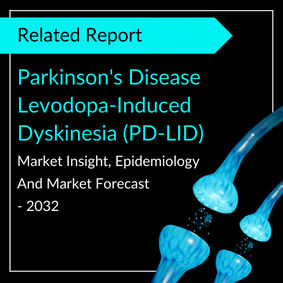