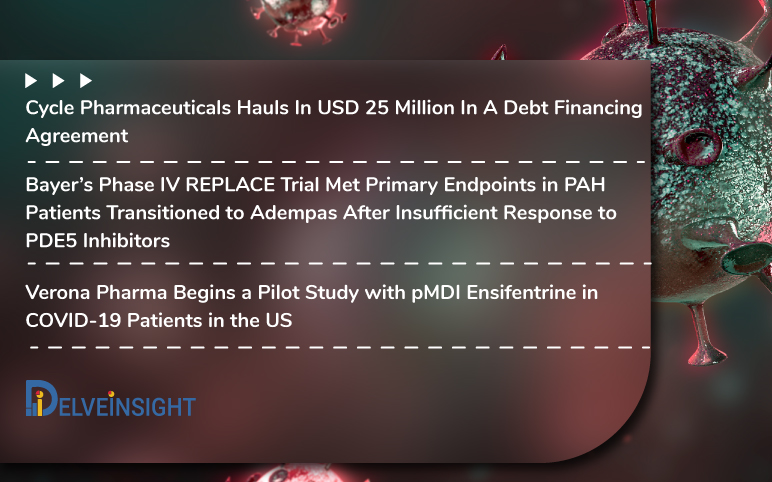 Headquartered in the UK, Cycle Pharmaceuticals provides drug treatments and services that revolve around rare genetic neurological and metabolic disorders. This strategic partnership enables Cycle to build on the success of NITYR (nitisinone) Tablets. The U.S. FDA approves NITYR for the treatment of Hereditary Tyrosinemia type 1 (HT-1) combined with dietary restriction of tyrosine and phenylalanine. HT-1 is an ultra-rare genetic disorder characterized by elevated levels of amino acid tyrosine in the blood.

According to Cycle’s CEO Antonio Benedetti, the financing agreement will facilitate the easy availability of the capital to smoothly deliver drug treatments for rare genetic diseases with the latest technologies.  Rare diseases are under-represented and have several unmet needs in the form of a lack of proper clinical trials and standard cure for the disease.

Bayer announced the results of Phase IV REPLACE (Riociguat rEplacing PDE-5i Therapy evaLuated Against Continued PDE-5i thErapy) trial. The study met its primary endpoint in intermediate-risk adult patients with pulmonary arterial hypertension (PAH) who have transitioned to Adempas (riociguat) after insufficient response to phosphodiesterase-5 inhibitor (PDE5i) therapy either as monotherapy or in combination with an endothelin receptor antagonist (ERA).

The data was presented as late-breaker during the ALERT session at the annual meeting of the European Respiratory Society (ERS) virtually. The data was a part of a collaborative deal between Bayer and Merck (Abstract #3802).

The trial results demonstrated 41 percent of the patients having transitioned to Adempas therapy successfully met the composite primary endpoint of clinical improvement in the absence of clinical worsening, compared with 20 percent in the PDE5i group.

Verona Pharma announced the initiation of a pilot study (NCT04527471) aimed to evaluate the efficacy and safety of Ensifentrine delivered via pressurized metered-dose inhaler (“pMDI”) formulation in U.S. patients hospitalized with COVID-19.

Ensifentrine is a first-in-class drug that combines bronchodilator and anti-inflammatory activities in one compound. The drug has improved oxygenation, reduced inflammation in the lungs, and enhanced mucus clearance, as per the results from the clinical trial in other respiratory diseases.

The study is a second multiple-dose and a part of the Phase II trial to investigate the efficacy and safety of the pMDI formulation drug. It will evaluate the key outcomes, including the facilitation of recovery from the viral infection, clinical status improvement, and reduction in supplemental oxygen use and progression to mechanical ventilation in moderate to severe chronic obstructive pulmonary disease patients.

The results from the study (Part B) are expected to be revealed in the first half of 2021.