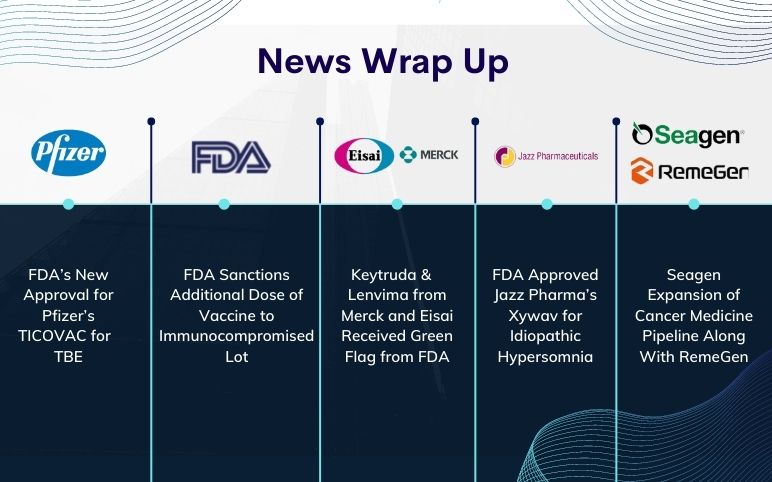 The FDA approved the combination of Keytruda and Lenvima produced by Merck and Eisai, as a first-line treatment of adult patients with advanced renal cell carcinoma (RCC). The efficacy and safety results were produced from a broad research study, multicenter, open-label, randomized phase 3 trial data from the Keynote-581 trial of the first-line therapy indicated to the patients that resulted in an extension of their survival. A delay in progression of advanced kidney cancer and a 34 % reduction in risk of death was observed in newly advanced kidney cancer diagnosed patients.

This approval comes as a second approval for the combination of Keytruda and Lenvima, after having an accelerated approval for endometrial cancer back in 2019.

The U.S Food and Drug Administration gave a red flag to FibroGen’s anemia pill roxadustat, for the use in patients suffering from kidney diseases owing to safety concerns that arose after results, which in turn are concluded for the presentation of further clinical studies to assess safety for future medicinal use.

The FDA’s outside advisory panel rejected the drug for usage in patients who require dialysis as well as in those who do not. The highly anticipated drug is an oral intervention that imitates the body’s behavior in high altitudes and revives the production of red blood cells to treat anemia in patients with chronic kidney disease.

Although it has gained approval in other countries that include China, Japan, Chile, and South Korea and is also under review in the EU, FDA is cautious of its usage and plans to only approve it after another round of clinical studies safety data presentation, for medicinal use in the U.S.

The USFDA recommended emergency usage of Pfizer-BioNTech COVID-19 Vaccine and the Moderna COVID-19 Vaccine as an additional dose to immunocompromised individuals, especially for people who went through an organ transplant or experienced a similar level of immunocompromise. The people who underwent surgeries like this are vulnerable to infections, their bodies tend to have low immunity that can not fight infections like COVID-19. After 2 shots, a third dose indication was observed in immunocompromised individuals and concluded that an administration of a third dosage can increase a level of protection in individuals like these.

Acting FDA Commissioner Janet Woodcock, M.D. announced, “The country has entered yet another wave of the COVID-19 pandemic, and the FDA is especially cognizant that immunocompromised people are particularly at risk for severe disease. After a thorough review of the available data, the FDA determined that this small, vulnerable group may benefit from a third dose of the Pfizer-BioNTech or Moderna Vaccines.”

In order to prevent Tick-borne Encephalitis (TBE) in individuals of 1 year and older, Pfizer’s newly approved vaccine TICOVAC adds another feather in its cap. It is the only vaccine to be approved for the protection of U.S. adults and children against the TBE virus when visiting or living in TBE endemic areas.

TBE is a viral infection of the brain and spine that is caused due to transmission in humans through the bite of an infected tick, and sometimes can also occur by ingesting unpasteurized milk or milk products from infected animals.

TBE vaccine is produced using a master ‘seed’ virus which is almost identical to the TBE virus in real life. The vaccine induces neutralizing antibodies as a response against the natural TBE virus, as the sequence and structure of the virus subtype match those found in nature.

“We are proud to deliver the first vaccine to help protect people in the U.S. against TBE, if they are traveling to any risk areas,” said Nanette Cocero, Ph.D., Global President, Vaccines, Pfizer. “This vaccine has helped to protect millions of people in TBE endemic regions since its first approval outside the U.S. 45 years ago. This authorization helps to ensure that people from the U.S. are also able to receive this vaccination if needed, reflecting our commitment to provide health for all.”

Paris-based Pharmaceutical Ipsen draws out the NDA for palovarotene from the U.S Food and Drug Administration, which could have entered the ultra-rare genetic disease market. The drug was being produced to avert heterotopic ossification, a new bone formation in people with fibrodysplasia ossificans progressive (FOP). The rarity of disease – 1.36 person/million around the globe.

Palovarotene is an oral selective retinoic-acid receptor-gamma agonist. When first data was published, FDA designated it as a breakthrough therapy for the treatment of fibrodysplasia ossificans progressive (FOP) and was obtained by Ipsen when it bought Clementia Pharmaceuticals in April 2019.

FDA’s acceptance of NDA for the Priority Review committee and Ipsen had a discussion that additional clinical data from Ipsen’s Phase III MOVE and FOP program would be needed to further evaluate the drug. As a result, Ipsen withdrew the NDA for palovarotene and is considering the additional analysis of clinical data. After the collection of new data, resubmission of NDA for palovarotene is expected to occur.

Dr. Howard Mayer, Executive Vice President and Head of Research and Development, Ipsen, said “We remain committed to the FOP community through our clinical programs for Ipsen’s two investigational therapies palovarotene and IPN60130. We recognize the urgency from this community to bring a much-needed treatment option to people living with FOP around the world. Unfortunately, as there is no regulatory mechanism to “pause” the current ongoing review process, we have taken the decision to withdraw the NDA for palovarotene to undertake the additional analyses and evaluation needed, with plans to resubmit the data for palovarotene as soon as possible.”

Jazz Pharmaceuticals announced the U.S. FDA Approval of Xywav therapy that is a combination of calcium, magnesium, potassium, and sodium oxybates. It is an oral solution for the treatment of Idiopathic Hypersomnia in Adults and it is expected to enter the market later this year for medicinal use.

Idiopathic hypersomnia is a debilitating neurological sleep disorder that includes symptoms like excessive daytime sleepiness, severe sleep inertia or sleep drunkenness, long and unrefreshing naps; these all may lead to cognitive impairment and non-restorative nighttime sleep. It is evaluated that around 37,000 people in the U.S. suffer from idiopathic hypersomnia and are actively looking for treatment.

A global Phase 3 double-blind, multicenter, placebo-controlled, randomized withdrawal study was conducted by Jazz Pharmaceuticals that exhibits data of the efficacy and safety of Xywav for the treatment of idiopathic hypersomnia in adults.

“We are excited that with today’s approval Xywav will become the first and only medicine indicated to treat idiopathic hypersomnia, a unique medical condition that can have significant effects on the lives of those diagnosed with the condition,” said Bruce Cozadd, chairman and chief executive officer of Jazz Pharmaceuticals.

Seagen and RemeGen comes under an agreement to add an experimental antibody drug – disitamab vedotin, to the pipeline of cancer medicines

World leader biotech Seagen, in production of antibody-drug conjugate, strikes a deal with leading Chinese biotechnological firm RemeGen for the development of an experimental antibody drug disitamab vedotin, for the treatment of breast, bladder, and stomach tumors.

Seagen will pay USD 200 million upfront to RemeGen and also secure an exclusive worldwide license agreement of upto USD 2.4 billion regarding the potential milestone-based payments. The agreement states that Seagen will be leading the global development of drug – disitamab vedotin, whereas RemeGen will fund and oversee clinical trials and regulatory submissions in its territory.

A breakthrough therapy designation in 2020 was granted to Disitamab vedotin by U.S. Food and Drug Administration (FDA) for use in second-line treatment of patients with HER2-expressing, locally advanced or metastatic urothelial cancer (mUC) who have previously received platinum-containing chemotherapy.