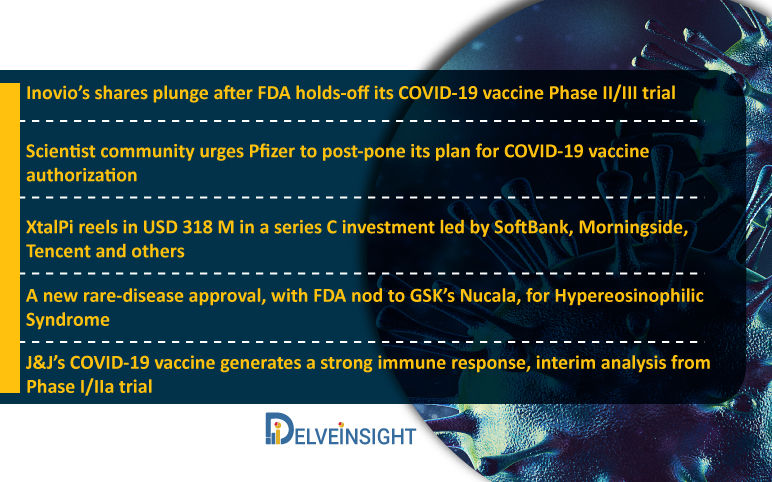 Inovio’s COVID-19 vaccine, INO-4800, Phase II/III clinical trials’ have been put under partial hold after the USFDA raised questions. The firm mentioned the reason behind the halt of the trials is not due to adverse events in the Phase I study and is not impacted in any way.

The clinical hold, besides INO-4800, also raises questions about Inovio’s Cellectra 2000 delivery device. The company is trying to address all the concerns the regulatory authority has by October.

As a part of the Operation Warp Speed that aims to make available the vaccine by January 2021, the clinical holds on the trials do not seem to be a positive sign. Inovio has been in the business for long now, yet has failed to secure approval for any of its products.  Earlier, AZ’s vaccine trial was also halted due to adverse effects in one of the patients. The holds and halts do put the timeline of the development and commercialization of the COVID-19 vaccines under debate.

Even so, more than 150 candidates are in different phases of clinical development, yet it remains to watch out for the one that will be parlayed to market.

In a quest to produce a safe and effective vaccine for COVID-19, a team scientists have beseeched Pfizer to wait for more data favoring the safety of its vaccine candidate before filing for seeking for FDA’s blessings.

The duo of Pfizer and BioNtech started working on developing the vaccine earlier this year. So far, the companies have enrolled over 35,000 participants in Phase III trials, out of which, 24,000 have gone ahead with their second doses. Furthermore, the duo plans to expand the trial to enroll around 44,000 people.

After having received inputs from the experts, the companies assure of not cutting on any of the safety standards and aims to provide the USFDA the safety data after waiting for two months of the second dose of the vaccine.

XtalPi reels in USD 318 M in a Series C investment led by SoftBank, Morningside, Tencent and others

AI-based molecule discovery and development technology startup, XtalPi, announced a hefty USD 318.8 Million funding in a Series C investment led by more than a dozen of companies including SoftBank Vision Fund 2i, PICC Capital, and Morningside in addition to the existing investors Tencent, Sequoia China, China Life, and SIG.

The company plans to use the yields to expand its prowess in AI, quantum physics, and cloud-computing based technology to address the challenges in the production of the pharma products, and produce curated approaches.

The proceeds will facilitate the leverage of AI to advance the development of drugs to later-stages of clinical development. By combining its virtual R&D platform with real-world data, XtalPi plans to develop a digital-twin R&D system to produce effective drug candidates that will have an edge over the others.

A new rare-disease approval, with FDA nod to GSK’s Nucala, for Hypereosinophilic Syndrome

GlaxoSmithKline has received its shot of green light from the USFDA for its first-in-class monoclonal antibody that targets IL-5, Nucala (mepolizumab) for the treatment of patients with Hypereosinophilic Syndrome (HES). With the approval, GSK has achieved victory over its rival AstraZeneca who is also in the hunt for the authorization for its candidate Fasenra (benralizumab) for HES.

Hypereosinophilic Syndrome is a rare set of disorders characterized by an unbelievably high eosinophil count in the blood, tissues, including either the heart, nervous system, or bone marrow for at least six months.

Nucala is the first biologic to have received the approval after showcasing statistically significant results in the Phase III trial in reducing HES flares in more than half of the total patients, with significant improvements in secondary endpoints.

The drug is already approved for severe eosinophilic asthma & eosinophilic granulomatosis with polyangiitis. Now the company is forming strategies to expand the portfolio further to cover chronic rhinosinusitis with nasal polyps.

After gracefully sauntering into the Phase III clinical trials of its COVID-19 vaccine JNJ-78436735, Jhonson and Jhonson recently posted the interim analysis of Phase I/IIa trial demonstrating the efficacy of its candidate to generate strong neutralizing antibody response against novel coronavirus SARS-CoV-2.

The data showed favorable results not only in efficacy but also in terms of tolerability with only a single dose in almost all the patients aged 18 years and older. The complete data will be released after the completion of Phase I/IIa trials evaluating the vaccine in two dose levels and as single and two-dose schedules.

The company also began the Phase III trials of its vaccine in single-dose and plans to enroll 60,000 people, becoming the fourth player as a part of Operation Warp Speed. Johnson & Johnson also plans to run a Phase III trial for its of a two-dose regimen of JNJ-78436735 vs. placebo later this year.