Uncomplicated UTI Treatment: Challenges and Opportunities in the Market

Urinary tract infection (UTI), also known as acute cystitis, is an infection in any part of the urinary system, including the kidneys, bladder, ureters, and urethra. It is one of the most common infections in local primary care, and UTIs are among the most frequently encountered infections in the outpatient setting. After respiratory tract infections, they are the most common reason why antibiotics are prescribed. The incidence of UTIs in adult males aged under 50 years is low, with adult women being 30 times more likely than men to develop a UTI.

It has been categorized into complicated and uncomplicated urinary tract infections. It typically affects individuals who are otherwise healthy and have no structural or neurological urinary tract abnormalities; it is very common in women.  Approximately 11% of women over 18 years’ experience at least one episode of uUTI per year.

DelveInsight’s Uncomplicated Urinary Tract Infections epidemiological analysis demonstrated that the total occurrence-specific uUTI cases, in 7MM, in 2022 was approximately 36K, which is expected to increase at a CAGR of 1.0% by 2032 due to lifestyle changes and an increase in Escherichia coli infection.

What does the diagnosis and uncomplicated UTI treatment landscape look like?

Uncomplicated UTI diagnosis is made through urine culture, urinalysis, and culturing of the clinical sample in the clinical laboratory. According to the current literature, only 50% of the population is diagnosed. There is a challenge of delayed diagnosis due to the sample transport to the laboratory and the time required for bacteria to grow on culture media. The results are typically delayed by two to three days from sample acquisition and are sometimes inaccurate. Due to this lengthy process and inaccuracy in diagnosis, there is an increase in the recurrent patient pool. Thus, there is an urgent need for more accurate and logistically feasible uncomplicated UTI diagnosis techniques.

What are the currently available uncomplicated UTI treatment options for patients?

Currently, uncomplicated UTI patients are managed on antibiotics. The goal of antimicrobial therapy is to eliminate the infecting organisms from the urinary tract and resolve symptoms. The uncomplicated UTI treatment is well recommended in the guidelines issued by the American Urological Association, European Association of Urology (EAU) Urological Infections, National Institute for Health and Care Excellence, and other geography-specific organizations.

Antimicrobial agents most commonly used in the first-line treatment for uncomplicated UTI include fluoroquinolones, nitrofurantoin, sulfonamides, fosfomycin, cephalosporins, and others. These agents are primarily used because of their tolerability, spectrum of activity against suspected uropathogens, and favorable pharmacokinetic profiles. For patients with recurrent disease, fluoroquinolones remain the mainstay uncomplicated UTI treatment option. Postmenopausal women are recommended hormone replacement therapy.

As per DelveInsight estimates, the total uncomplicated urinary tract infections market size in the 7MM accounted for approximately USD 1.0 billion in 2021. Fluoroquinolones and fosfomycin alone contribute to 50% of the uncomplicated UTI treatment market, and cephalosporin and nitrofurantoin are the other major contributors.

Empirical use of antibiotics contributes to misuse and over-use of antibiotics, resulting from unnecessary or inappropriate antimicrobial therapy, participating in the recent rise in bacterial resistance. In fact, for people with symptoms of UTI and bacteriuria, the main aim of uncomplicated UTI treatment is the relief of symptoms, but in case of unsuccessful uncomplicated UTI treatment, it causes alteration of urinary tract microflora, leading to an increased risk of clinical adverse events, including infections with multi-drug-resistant organisms and the development of antibiotic-resistant UTI.

Infections caused by multi-drug-resistant pathogens, such as extended-spectrum beta-lactamase (ESBL) and carbapenemase-producing Gram-negative bacteria, methicillin-resistant Staphylococcus aureus (MRSA), and bacteria resistant to broad-spectrum antibiotics, such as fluoroquinolones and cephalosporins, are indeed increasingly recorded among UTI and are the cause of a serious challenge to the public health system.

What is the unmet need for the current uncomplicated UTI treatment market?

There is a huge diagnostic and treatment unmet need in the uncomplicated UTI treatment market. Novel diagnostic techniques with higher accuracy and faster output are needed for early diagnosis of the disease.

For about approximately one-third of the uncomplicated UTI patients who develop recurrent disease, there is a lack of effective and safe uncomplicated UTI treatment options. Fluoroquinolones, prescribed in ~60–70% of the recurrent patients, are associated with severe adverse events. In May 2016, the US FDA advised that serious side effects associated with fluoroquinolone use “generally outweigh the benefits for patients with acute sinusitis, acute bronchitis, and uncomplicated urinary tract infections who have other treatment options.”

Apart from the above, other key players like Janssen Pharmaceuticals are developing ExPEC Vaccine (ExPEC10V and ExPEC4V) in PI/II trial, and GlaxoSmithKline/Fimbrion Therapeutics is developing GSK3882347 in PI for the uncomplicated UTI treatment.

What will be the major challenges in the uncomplicated UTI treatment market?

The blockbuster antibacterial drugs, such as azithromycin, ceftriaxone, ciprofloxacin, levofloxacin, were introduced over the last 20 years, many of which are now off-patent and have become even lower priced, and this will pose significant price pressure on the upcoming emerging uncomplicated UTI therapies. Payers and insurance bodies will try to limit drug usage with mediocre efficacy and high price.

1. What is an uncomplicated UTI?

2. How to treat uncomplicated UTI?

Currently, uncomplicated UTI patients are managed on antibiotics. The goal of antimicrobial therapy is to eliminate the infecting organisms from the urinary tract and resolve symptoms. The uncomplicated UTI treatment is well recommended in the guidelines issued by the American Urological Association, European Association of Urology (EAU) Urological Infections, National Institute for Health and Care Excellence, and other geography-specific organizations.

3. Which antibiotics are used in the treatment of uncomplicated UTIs?

The most commonly prescribed antibiotics in the uncomplicated UTI treatment market include the combination drug trimethoprim and sulfamethoxazole, trimethoprim, β-lactams, fluoroquinolones, nitrofurantoin, and fosfomycin tromethamine.

4. How is uncomplicated UTI diagnosed?

Uncomplicated UTI diagnosis is made through urine culture, urinalysis, and culturing of the clinical sample in the clinical laboratory. According to the current literature, only 50% of the population is diagnosed.

5. Which pharma companies are working in the uncomplicated UTI treatment market?

Amgen Reports Promising Mid-stage Results for its Olpasiran Candidate  Amgen has reported encouraging mid-stage results for its olpasiran candidate for lowering lipoprotein(a) - a risk factor for atherosclerotic cardiovascular disease - and now plans to move forward with a phase III program as soon as possi...

Uncomplicated Urinary Tract Infections are one of the most commonly diagnosed infections in the US, with the maximum prevalence in women who are sexually active. A wide range of pathogens can be a reason behind the manifestation of the condition; however, Escherichia coli, Klebsiella pneumoniae, Proteus mirabilis, ... 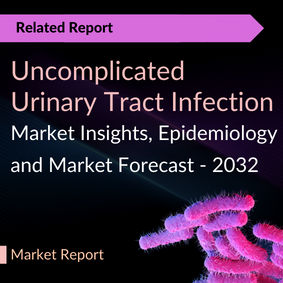