Non-small cell lung cancer (NSCLC) is the most common cancer, accounting for approximately 85% of all lung cancers. As per the American Cancer Society, almost 230K new cases were diagnosed in 2022 alone, and almost 130K deaths from lung cancer were recorded in the same year.

As per DelveInsight’s assessment, every year, about 7 out of 10 patients in the United States are diagnosed with metastatic NSCLC Stages IIIB and IV.

According to the SEER, if the cancer is found only in the part of the body where it started, it is localized (sometimes referred to as Stage I). The stage-specific cases of non-small cell lung cancer are 16%, 22%, 57%, and 4% for the localized, regional, distant, and unknown stages.

The approaches for non-small cell lung cancer treatment depend upon the disease stage. There are five stages for NSCLC: stage 0 (zero) and stages I through IV (1 through 4). Different stages have different severity.

Stage 0 of the disease is “in situ” and does not show signs of spreading. This means lung cancer cells are static and haven’t traveled to nearby tissues or cells.

Stage I refers to cancer cells that haven’t been spread to any lymph nodes. They are further classified into Stage I and Stage 2 based on their size. Stage IA cancer cells are small and can extend upto 3cm in size. In contrast, Stage IB can range from 3cm to 4cm in size.

Stage III tumor is further classified into three subtypes depending upon the tumor size. Stage III tumors are metastatic and spread in the lungs’ lymph nodes. However, they do not spread to nearby spaces and organs. Stage IV spreads to more than one area inside the lungs and fluids surrounding the pulmonary cavity, including another bloodstream.

It is observed that, over the past few years, immune checkpoint inhibitors (ICIs) have emerged as one of the major standards of care in treating advanced non-small cell lung cancer (NSCLC) patients either in first line or beyond. To further improve the treatment scenario, several leading pharmaceutical giants, including Novartis Pharmaceuticals, AbbVie, Janssen Pharmaceuticals, Xcovery, Eli Lilly and Company, Sanofi, Pfizer,  Astellas Pharma, Seattle Genetics, and others, are also involved in developing novel therapies for non-small cell lung cancer treatment.

Imfinzi (Durvalumab) is a human monoclonal antibody that binds to PD-L1 and blocks the interaction of PD-L1 with PD-1 and CD80, countering the tumor’s immune-evading tactics and releasing the inhibition of immune responses. This product is given by intravenous infusion and is approved in unresectable, Stage III NSCLC after chemoradiation therapy in the US, Japan, across the EU, and in many other countries, based on the Phase III PACIFIC trial.

Opdivo (Nivolumab) by Bristol-Myers Squibb is a human immunoglobulin (Ig) G4 monoclonal antibody directed against the negative immunoregulatory human cell surface receptor PD-1, with immune checkpoint inhibitory and antineoplastic activities. For NSCLC, it is approved for patients with metastatic NSCLC and progression on or after platinum-based chemotherapy. Patients with EGFR or ALK genomic tumor aberrations should have disease progression on FDA-approved therapy for these aberrations before receiving Opdivo.

Keytruda, also known as pembrolizumab, is a PD-1-blocking antibody. It is mainly used for advanced cancers that have spread to other body parts or are not responding to other treatments. In some cancers, it is only given to patients whose tumors produce high levels of a protein known as PD-L1. In NSCLC, it is in combination with pemetrexed and platinum chemotherapy, as first-line treatment of patients with metastatic nonsquamous NSCLC, with no EGFR or ALK genomic tumor aberrations, and in combination with carboplatin and either paclitaxel or paclitaxel protein-bound, as first-line treatment of patients with metastatic squamous NSCLC.

Tecentriq (Atezolizumab) by Genentech (a subsidiary of Roche) is a PD-L1 blocking antibody. It is an Fc-engineered, humanized, non-glycosylated IgG1 kappa immunoglobulin with a calculated molecular mass of 145 kDa. Tecentriq is approved for indications such as NSCLC, SCLC, Urothelial Carcinoma, and Triple-Negative Breast Cancer (TNBC). For NSCLC, it is approved in combination with other drugs, such as bevacizumab, paclitaxel, and carboplatin, for the first-line treatment of adult patients with metastatic non-squamous NSCLC with no EGFR or ALK genomic tumor aberrations, among others.

Vizimpro (dacomitinib) is oral, a once-daily prescription medicine used to treat NSCLC that has spread to other body parts (metastatic). It is a product of Pfizer Vizimpro and is used as a first treatment if your tumor has certain abnormal EGFR genes. Alunbrig (Brigatinib) is a kinase inhibitor used to treat patients with ALK-positive metastatic NSCLC who have progressed on or are intolerant to crizotinib. Accelerated approval was granted for this indication based on tumor response rate and duration of response. ARIAD Pharmaceuticals initially discovered this product, which Takeda later acquired in February 2019.

Vitrakvi (Larotrectinib) is an oral selective tropomyosin receptor kinase (TRK) inhibitor used for adult treatment. Pediatric patients with solid tumors with a neurotrophic receptor tyrosine kinase (NTRK) gene fusion without a known acquired resistance mutation, are metastatic or where surgical resection is likely to result in severe morbidity, and have no satisfactory alternative treatments or that have progressed following treatment. In May 2020, the USFDA approved Tabrecta (Capmatinib)  by Novartis Pharmaceuticals, an oral, potent, and selective MET inhibitor, the first-line therapy for patients with metastatic MET exon 14 skipping-mutated (METex14) NSCLC. Novartis licensed Capmatinib from Incyte Corporation in 2009.

The non-small cell lung cancer can resist the targeted therapies, limiting their uptake. The expected entry of generic or biosimilar for blockbuster drugs like Keytruda, Opdivo, and Tarceva will negatively affect the treatment market.

What Lies Ahead in the Non-Small Cell Lung Cancer Market?

The development of therapies targeting specific mutations is expected to dominate the upcoming market. The non-small cell lung cancer market size of 7MM is expected to increase by 2032 at a CAGR of 10.7%.

NSCLC is the most common type of lung cancer, accounting for approximately 85% of all lung cancers. However, NSCLC metastasizes to other organs slower than SCLC, and microscopically, SCLC is composed of much smaller cells.

What are the non-small cell lung cancer symptoms?

Non-small cell lung cancer symptoms include fatigue, shortness of breath, cough, loss of appetite, chest pain, mostly if the tumor spreads to the lining of the lung or other parts of the body near the lungs, and coughing up phlegm or mucus.

What are the non-small cell lung cancer treatment options?


Patients of NSCLC with resectable disease may be cured by surgery or surgery followed by chemotherapy. Local control can be achieved by radiation therapy in a large number of patients with unresectable diseases.

Are any FDA-approved drugs available in the non-small cell lung cancer market?

Currently, the FDA-approved drugs available in the cutaneous T-cell lymphoma market include Tagrisso, Keytruda, Vitrakvi, and many more.

Non-small cell lung cancer (NSCLC) is the most common cancer, accounting for appro... 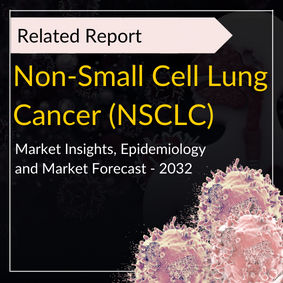