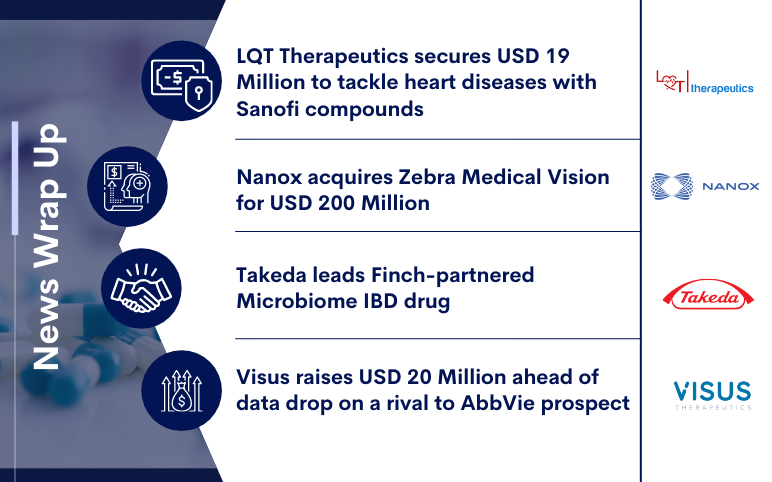 LQT Therapeutics intends to tackle debilitating heart arrhythmias with limited interventions, and investors are planting a seed in the biotech’s heart with USD 19 million.

The two-year-old Canadian biotech will utilize series A to bring a lineup of SGK1 inhibitors through phase 1 clinical studies. LQTT has a portfolio of in-licensed compounds from Sanofi that prohibit serum/glucocorticoid-regulated kinase 1, or SGK1.

Current treatments for Long QT syndrome are meant to stop erratic heartbeats and sudden death. Beta-blockers, such as nadolol and propranolol, are the standard therapy and sometimes combine with heart rhythm drug mexiletine, made under various names by Teva, Lannett, Boehringer Ingelheim, and other biopharma.

Israeli medical imaging firm Nanox announced that it would take over AI medical imaging insights startup Zebra Medical Vision for approximately USD 200 million in a deal that positions the future combined company as a force in the medical tech industry.

Nanox will reimburse USD 100 million upfront for the acquisition and up to another USD 100 million tied to achievements of specific milestones, all to be paid in Nanox shares, the companies explained in a statement.

Zebra Medical is anticipated to be run as a wholly-owned subsidiary under the Nanox brand.

Zebra Medical was founded in 2014 by Eyal Toledano, Eyal Gura, and Elad Benjamin as an AI solution that reads medical scans and automatically detects anomalies, helping radiologists with workflow and efficiency. Through its development and use of different algorithms, Zebra Medical has been able to recognize visual symptoms for diseases such as breast cancer, osteoporosis, and fatty liver, as well as conditions such as aneurysms and brain bleeds.

The company has seven FDA clearances for its solutions used in hospitals in the US, Europe, Australia, India, and Latin America.

When Takeda collaborated with Finch Therapeutics on inflammatory bowel disease (IBD), it intended to pick up programs after they had finished phase 2 trials. Now, the Japanese pharma is moving that timeline up, taking the lead on an ulcerative colitis program before it hits the clinic.

Under the agreement, struck in April 2017, Takeda, which eyes GI as one of its core areas, handed over USD 10 million upfront for the global rights to develop and sell FIN-524, a microbiome IBD treatment. The duo did not disclose other financial details at the time but has since revealed that Finch could collect up to USD 180 million in payments if certain biobucks goals are met. Takeda also received the rights to follow-on products in IBD.

The original agreement had Finch responsible for early-stage development through phase 2 studies. In November 2019, the duo expanded the deal to comprise Finch’s technology to target Crohn’s disease, a form of IBD.

Under the amended agreement, Takeda will take the lead on the development of FIN-524, now known as TAK-524 in ulcerative colitis, as declared by the companies. Finch will proffer ongoing technical support through the phase 1 trial of the treatment.

Visus Therapeutics has raised a further USD 20 million as it closes in on the release of mid-phase data on a potential treatment for age-related long-sightedness. The financing comes on the heels of phase 3 data on rival candidates in development at AbbVie and Eyenovia.

Seattle-based Visus looks set to cede a head start to AbbVie and Eyenovia but has still found a clutch of VCs willing to fund its pursuit of the rivals. Johnson & Johnson Innovation, RTW Investments, and Wille came together to pump USD 36 million into Visus. LSP has led the investment of a further USD 20 million in Visus. Sage Partner and existing backers also participated.

Visus will utilize the cash to move immediately into pivotal phase 3 studies upon delivering positive data from an ongoing phase 2 clinical trial of Brimochol in presbyopia, the medical name for the inability to focus on nearby objects that affect people aged 40 years and up.

Upon starting the phase 2 trial in March, Visus targeted the delivery of top-line data in mid-2021.

The slight slip could see Visus fall further behind Eyenovia and, in particular, AbbVie in the race to get a presbyopia treatment to market. AbbVie reported the success of two phase 3 trials of its drug trial in October and filed for FDA approval in February. Eyenovia said it had the primary endpoint in phase 3 clinical trial in May, although it still needs to run a second study.

Visus is yet to deliver phase 2 data but has a potentially differentiated asset. AbbVie and Eyenovia are both developing candidates based on pilocarpine, a direct-acting cholinergic parasympathomimetic agent already used to treat glaucoma. Eyenovia is pitching its delivery system as a point of difference to AbbVie, but the candidates have fundamental similarities.