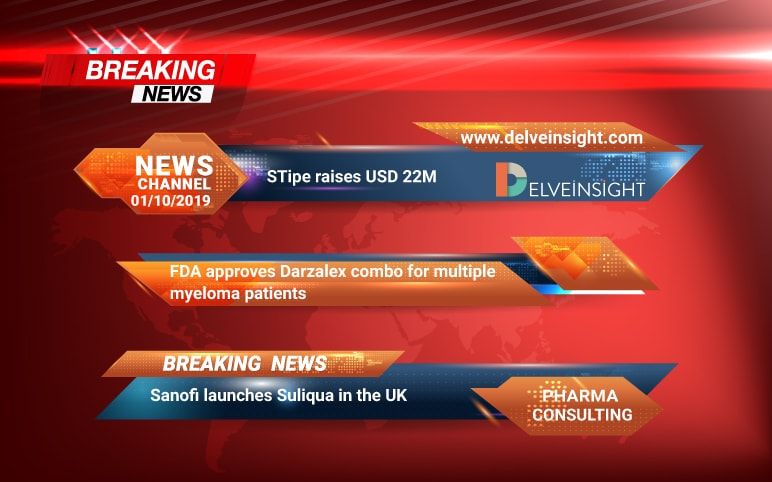 STipe, an immuno-oncology company, with its STING pathway is planning to target a wide range of haematological and solid tumors. The company promises of the increased sensitivity of the immune system while detecting tumorous cells by its STING pathway. The pathway changes the environment tumour prospers in and accelerates the anti-tumour activity.

The US FDA has given its recommendation to Darzalex (daratumumab) based combination for the treatment of newly diagnosed multiple myeloma patients eligible for a stem-cell transplant.

Approved in combination with Velcade (bortezomib), thalidomide and dexamethasone (collectively known as VTd), Darzalex is an antibody which blocks CD38, found on the surface of multiple myeloma cells. The drug, Darzalex, was at first developed by Genmab and was later on licensed to Janssen.

The FDA gave its nod on the basis of the results of Phase III CASSIOPEIA study conducted by the Intergroupe Francophone du Myelome in collaboration with the Dutch-Belgian Cooperative Trial Group for Hematology Oncology and Janssen.

The initial treatment for a myeloma patient depends upon whether or not the patient is a candidate for stem cell transplantation in the eligible patients, high-dose chemotherapy with autologous hematopoietic stem-cell transplantation (ASCT) has become the preferred treatment for patients under the age of 65. Patients who receive ASCT with high-dose induction chemotherapy have a median survival of 68 months. Other chemo drugs used to treat multiple myeloma include Melphalan, Vincristine (Oncovin), Cyclophosphamide (Cytoxan), Etoposide (VP-16), Doxorubicin (Adriamycin), Liposomal doxorubicin (Doxil), Bendamustine (Treanda), etc.

For the supportive care measures, radiotherapy, vertebral augmentation and bisphosphonates may prove to be beneficial. Opiates are often needed to manage bone pain. Moreover, for neuropathic pain, calcium channel blockers (such as gabapentin) or serotonin noradrenaline reuptake inhibitors (such as amitriptyline) may help.

Sanofi has launched its diabetes therapy Suliqua (insulin glargine/lixisenatide) in the UK, eight months after it was approved by the EMA.

The drug has been authorized for the administration in patients living with Type 2 diabetes, in combination with metformin. To improve glycemic control, Suliqua is prescribed once-daily.

The clinical trial evaluated the efficacy of the drug in combination with metformin in 1900 enrolled patients.