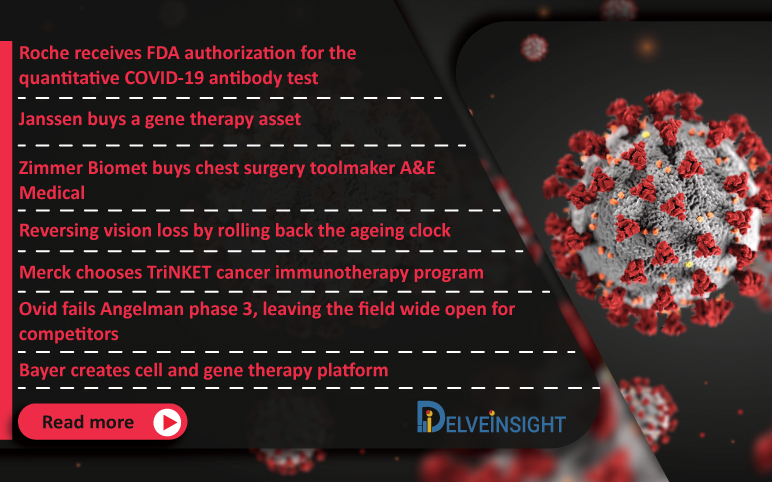 Roche has got an authorization from the FDA for a more accurate COVID-19 blood test capable of measuring the levels of specific antibodies, which target the cell-unlocking spike protein of coronavirus.

The company anticipates the test can aid in tracking the success of vaccines and recognize people who have recovered from infection and could serve as convalescent plasma donors or help in the development of new therapies.

The FDA nods for the Elecsys Anti-SARS-CoV-2 S quantitative antibody test that runs on Roche’s cobas e analyzers, follows its September launch in Europe after receiving a CE mark.

The antibody test has proved to be very accurate in the 15 days after screening and diagnosis of active infection with a molecular test, agreeing with positive PCR results 96.6% of the time and negative results 99.98% of the time, as per Roche.

The agreement is for the investigational phase 1 gene therapy HMR59 that is given as a one-and-done shot into the eye to preserve vision in patients with geographic atrophy, which is a late-stage and severe form of age-related macular degeneration (AMD).

AMD Patients often have low levels of CD59, which is a protein that protects the retina from damage caused by a vital part of the body’s natural immune response called complement. An overactivity of complement damages cells in the macula in geographic atrophy.

HMR59 is designed to develop the ability of retina cells to make a soluble form of CD59, with the theory being it can aid halt further damage and retain a patient’s vision. It has already succeeded in a phase 1 test, with a second in patients with wet AMD.

There are presently no medical treatments, which can regenerate retinal cells that have atrophied, though gene therapies and stem cell therapies are the leading R&D hopes in this arena.

Zimmer Biomet has signed an agreement for acquiring A&E Medical, maker of open-chest surgery tools, for USD 250 million in cash.

A&E’s portfolio covers a complete line of sternum closure devices, comprising of suture, fixation and cable systems, plus a range of disposable products such as pacing wires and punch tools utilized for tissue biopsies.

The acquisition has been concluded but is anticipated to have little influence on net revenues for the year, according to the company. Zimmer Biomet signed on to pay USD 150 million upfront to A&E’s owners, Vance Street Capital, with the rest to be paid in 2021.

Bryan Hanson, President and CEO of Zimmer Biomet said in a statement that A&E Medical’s high-growth business and innovative products are very complementary to their current portfolio and will enable them to proffer a complete suite of sternal closure products, including rigid fixation that has the potential to change the standard of care and address a variety of unmet patient and surgical needs. He also estimates that the global sternal closure business is currently increasing by high single-digit percentages each year.

Reversing vision loss by rolling back the ageing clock

The researchers have been searching for ways to stop the ageing process for millennia; however, such methods remain obscure. Scientists at Harvard Medical School have now proffered a light of hope that the ageing clock in the eye could be turned back, at least in animals.

The Harvard team fortunately triggered mature nerve cells in mice eyes to adopt a youthful state by reprogramming the expression of three genes. The method turned back glaucoma in the mice and reversed age-related vision loss in aged mice, as per the results published in Nature.

The team said that if further studies turn out to be satisfactory, they could develop therapies, which employ the same method for repairing damage in other organs and probably treat age-related diseases in humans too.

The researchers concentrated on the “Yamanaka factors,” which are four transcription factors—Oct4, Sox2, Klf4 and c-Myc. Shinya Yamanaka discovered that the factors could alter the epigenome, and in that way modify mature cells back to a stem cell-like state. It has been speculated that modifications to the epigenome drive cell ageing, especially a process known as DNA methylation, by which methyl groups are tagged onto DNA.

Merck has snapped up Dragonfly’s TriNKET cancer immunotherapy program. The U.S. Big Pharma is getting its hands on its first TriNKET immunotherapy candidate from the biotech that comes after the duo extended their original collaboration earlier this year with a multi-target pact for developing and selling natural killer (NK) cell engager immunotherapies in oncology, infectious disease and immune disorders.

Merck first collaborated with the biotech in a pact worth nearly USD 700 million two years ago, with an aim on a series of solid tumour targets.

This also comes around three months after Bristol Myers Squibb/Celgene gave nearly half a billion dollars in near-term and upfronts for licensing Dragonfly’s interleukin-12 immunotherapy program.

Dragonfly’s tech is based on its TriNKET, or Tri-specific, NK cell Engager Therapeutics that binds to surface proteins, which are expressed on both cancer cells and NK cells.

A phase 3 trial of Ovid Therapeutics’ OV101 in Angelman syndrome has flunked its primary endpoint. Ovid has ceased the most other elements of its OV101 Angelman work in response to the setback and turned its goal to its next most advanced asset, OV935.

Ovid showed a phase 2 data on OV101 in Angelman, a genetic nervous system disorder, in 2018. Ovid aimed a seemingly positive aspect of the data set and pushed into phase 3 despite observers asking whether the available data on the delta-selective GABAA receptor justified further development.

The top-line phase 3 readout hints the sceptics were correct. In the 97-subject clinical trial, children who got OV101 orally once a day for three months improved by 0.7 points on an Angelman scale—the placebo group enhanced by 0.8 points, which leads to the miss of its primary endpoint.

Bayer has made a cell and gene therapy platform to assist its growing pipeline of advanced therapy medicinal products. The platform is planned for enabling Bayer to make its expertise and resources accessible to its partners while preserving their autonomy and culture.

Bayer has moved into cell and gene therapies on various fronts lately, acquiring an induced pluripotent stem cell specialist BlueRock Therapeutics and adeno-associated virus (AAV) gene therapy player Asklepios BioPharmaceutical while investing in other biotechs. The agreements have given Bayer a pipeline of five advanced assets and more than 15 preclinical prospects.

Instead of including BlueRock and AskBio, Bayer chose to let the businesses operate as independent companies in a hope to preserve their cultures. However, Bayer also intends to let the companies identify the advantages, which can come from being part of a larger organization.