CRISPR technology or CRISPR/Cas9 technology is a genome-editing tool derived from the bacterial defense system against viruses and plasmids. The system comprises the Cas9 nuclease enzyme to create site-directed dsDNA (double-stranded DNA) break and a guide RNA, which is a predesigned 20 bp long RNA sequence within a more extended RNA scaffold. This sequence guides the Cas9 enzyme to the target sequence to cut across both DNA strands. The CRISPR system varies among bacterial species depending on the structure and function. Presently, the system is mainly categorized into two classes (I and II) and six types (I–VI). Class I represents 90% of the CRISPR systems and includes types I, II, and IV, whereas Class II represent only 10% with types II, V, and VI. The former class is found in both bacteria and archaea; however, the latter is found only in bacteria. Due to the simplicity and efficiency of the CRISPR system, the tool is preferred more than the other existing gene-editing technologies.

This technology has been extensively used by countries such as the United States and Canada, making the North American region one of the leading markets for CRISPR technology. As per the 2019 data released by the American Association for the Advancement of Science, the world’s largest general scientific society, the US was the leading country to file patent applications for distinct inventions that involved CRISPR in 2018. The presence of most of the key CRISPR technology-based companies in the US also contributes to the market. Moreover, strategic business activities such as mergers, acquisitions, licensing agreements, and others by the developer of various CRISPR technology-based products are also bolstering the regional CRISPR technology market. For instance, on October 12, 2020, Merck signed agreements licensing its CRISPR technology to two companies — PanCELLa, a cell therapy firm based in Toronto, Canada, and Takara Bio USA, Inc., a biotechnology company based in Mountain View, California, US.

CRISPR technology has massive potential in agriculture and crop improvement. Various scientists use the CRISPR-Cas9 systems’ recognition of specific DNA sequences and apply it in the development of improved crops with high yield, improved shelf life, and others. Furthermore, the scientists have shifted their focus on CRISPR technology to modify the staple crops to make them tolerant to the changing environment and help to combat the growing concern of food security. For instance, in September 2021, Sanatech Seed, a Japanese start-up, released the first CRISPR-edited, GABA enriched tomatoes in Japan, which have five times the normal amount of the nutrient GABA compared to normal tomatoes.

Development of targeted medicines and treatments

The CRISPR/Cas9 technology can revolutionize the development of drugs for a wide range of genetic disorders, including blood disorders and neurodegenerative disorders, among others. This technology has been extensively used in research for developing cancer medications. For instance, a Chinese healthcare company, Chengdu MedGenCell, Co., Ltd., in collaboration with Sichuan University, initiated a clinical trial to study CRISPR-Cas9 PD-1-edited T cells for treating patients with advanced non-small-cell lung cancer in 2016. The Phase I study was completed in 2020. The study’s primary endpoints were safety and feasibility, and the secondary endpoint was efficacy. As per the data released in April 2020, all the prespecified endpoints were met.

CRISPR technology-based diagnostics have been extensively used for many biomedical applications. The technology, in particular, can effectively sense the nucleic-acid-base biomarkers for infectious and non-infectious diseases. In addition, it can also be used to detect deletions and mutations of indicative genetic disorders. One such instance was when in May 2020, Sherlock Biosciences received FDA Emergency Use Authorization for CRISPR SARS-CoV-2 rapid diagnostic.

Bioenergy is a leading alternative to fossil fuels, and scientists have recently made some significant advances in the field of biofuel production by utilizing CRISPR technology. For instance, in 2017, ExxonMobil, along with Synthetic Genomics, used CRISPR gene-editing technology to produce an algal strain that could pave the way to a low-carbon fuel and a sustainable future, thereby reducing the risk of climate change.

Some of the CRISPR technology companies that are currently dominating the market include:

Thermo Fisher Scientific is an American supplier of scientific instrumentation, reagents and consumables, and software services. Based in Waltham, Massachusetts, Thermo Fisher was formed through the merger of Thermo Electron and Fisher Scientific in 2006. The company has developed various tools and solutions for every CRISPR genome editing workflow step. Some of the CRISPR products are as follows:

Agilent Technologies Inc. is a global leader in life sciences, diagnostics, and applied chemical markets, providing application-focused solutions that include instruments, software, services, and consumables for the entire laboratory workflow. The company is headquartered in California in the US and delivers its high-quality solutions across 110 countries. Agilent focuses its expertise on six key markets: food, environmental and forensics, pharmaceutical, diagnostics, chemical energy, and research. Some of the CRISPR products developed by the company are as follows:

Synthego is a privately held genome editing company located in the US. The company accelerates research and development to improve human health by leveraging machine learning, automation, and gene editing to develop various CRISPR-based tools. The company is at the forefront of innovation, enabling the next generation of medicines by delivering genome editing at an unprecedented scale. Some of the CRISPR-based products developed by the company are as follows:

Founded in 2017, Mammoth Biosciences, Inc. is located in California, United States, and developing the next generation of CRISPR products. The company is leveraging its platform to address the challenges across healthcare, agriculture, environmental monitoring, biodefense, and more. Some of the CRISPR technology-based products of the company are as follows:

Founded in 2006, Cellecta, Inc. is a private company located in Mountain View, California. The company is predominantly focused on developing advanced high-throughput (HT) genetic screening technologies to discover and characterize novel therapeutic targets and drugs. The genetic screening portfolio of the company includes shRNA and CRISPR screening services, custom and off-the-shelf pooled libraries, and knockout/knockdown cell lines that facilitate genome-wide functional screening and the identification and validation of genes involved in critical biological and disease pathways.

CRISPR technology is blooming in the gene-editing field, and the current market for this technology is highly competitive as it comprises many key CRISPR technology companies. As per DelveInsight’s assumption, the global CRISPR technology market to grow significantly during the forecast period because of the various advantages associated with the technology, which enables easy and simplified gene editing compared to other available methods. Moreover, there is a rise in the adoption of CRISPR technology among researchers as the platform allows scientists to modify cell and animal models swiftly, thus accelerating the pace of research for any diseases such as cancer, hematological disorders, and neurodegenerative disorders. Furthermore, the use of this technology for diagnostic purposes in medical fields apart from treatment is another factor that might raise the adoption of CRISPR technology-based diagnostic tools, thereby augmenting the market growth.

Additionally, growing initiatives by the government and various foundations to support CRISPR-based research to improve the treatment of various disorders are also projected to bolster the market for this technology. For example, in November 2020, Intellia Therapeutics, a company developing medicines using CRISPR gene-editing technology, received a grant from the Bill & Melinda Gates Foundation to research in vivo sickle cell disease (SCD) treatments using its CRISPR/Cas9 genome editing technology. The above developmental program is a part of the Gates Foundation’s broader initiative to speed up the development of safe, effective, and durable gene-based cures in developing countries within the next 7–10 years. Therefore, along with such initiatives, and the rising prevalence of various diseases, the developing countries are likely to provide money-making opportunities for companies working with the CRISPR technology.

FDA Gives Green Signal to First Measles Vaccine in Almost 50 Years GSK announced that the company's vaccine for protection against mumps, measles, and rubella (MMR) had been approved by the U.S. FDA. According to data from six clinical studies, the company filed a Biologics License Application in August 2021. ...

Artificial Intelligence (AI), with its wide range of applications, is enhancing the speed and accuracy of businesses across various industries such as manufacturing, healthcare, finance, marketing, and several others. To take advantage, globally, companies, whether big or small, are actively adopting artificial int...

AbbVie, Sofinnova back USD 38 Million for Nitrome Biosciences Nitrome Biosciences contemplates treating Parkinson's disease and diabetes by targeting a new class of enzymes. The pharma raised USD 38 million from the Sofinnova Partners and AbbVie Ventures. The San Francisco-based biotech is focusing at a famil... 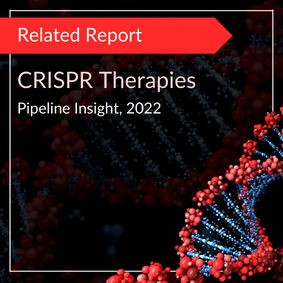