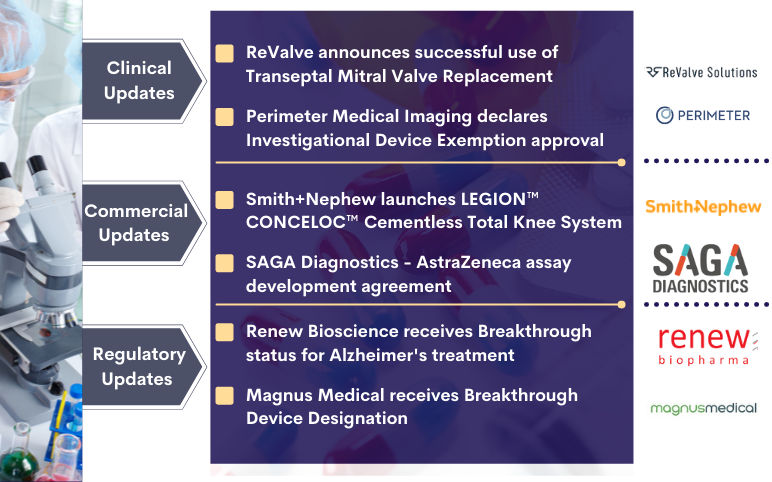 On November 01, 2021, ReValve Solutions, Inc., a company operating in the field of transcatheter structural heart replacement and repair, announced the successful first human use of its transcatheter, Palmetto System, for mitral valve replacement. It treated the patient successfully who suffered from severe mitral valve regurgitation and heart failure.

Charles Davidson, MD, said that the complexity of mitral valve pathology brings up the challenges for transcatheter therapies for effective treatment. The first in human experience with this innovative technology displays promise for patients with advanced mitral valve regurgitation.

Julie Logan Sands, CEO and Founder of ReValve Solutions, added that the case is a significant step forward in Re-Imaging the structural heart disease treatment. Their unique portfolio of technologies is based on their understanding of the evolution of the disease and the requirement to offer for ongoing valvular heart disease management.

On November 02, 2021, Smith+Nephew, the global leader in the medical technology business, announced the launch of its LEGION CONCELOC Cementless Total Knee System (TKS) and first completed surgical procedures in the United States.

Dr Mathias Bostrom, an orthopaedic surgeon at the Hospital for Special Surgery in New York City, said that LEGION CONCELOC addresses the vital elements of the cementless total knee through its unique design. The asymmetrical keel is designed to achieve immediate bone fixation, while the patented 3D printed structure of CONCELOC encourages biological ingrowth.

According to DelveInsight’s “Knee Reconstruction Devices Market & Competitive Landscape”, the introduction of cementless knees will boost the market growth in the coming years and strengthen the position of  Smith+Nephew in the global market.

The LEGION CONCELOC Cementless Total Knee System is currently available in North America and will be launched in various European and Asia Pacific markets once regulatory approvals are finalised.

On November 02, 2021, Renew Bioscience, a commercial-stage medical technology company, received Breakthrough Device Designation status from the US Food and Drug Administration (FDA) for the Cerezen® Device, a novel treatment for Mild Cognitive Impairment due to Alzheimer’s Disease (MCI) and mild dementia of the Alzheimer’s type (mild AD).

Renew Bioscience COO Tony Robinson said that they are incredibly pleased with the progress related to the Cerezen® Device, specifically receiving the Breakthrough designation from the FDA. They genuinely believe that Cerezen® represents a significant potential advancement in treating Alzheimer’s and dementia and look forward to sharing some of the data from the recently completed pivotal study at the Clinical Trials on Alzheimer’s Disease (CTAD) Conference next month in Boston.

The company’s Cerezen® Device is a drug-free, non-invasive technology intended to enhance cerebral vascular health by improving circulation, simulating the physiological effects of vigorous exercise, and stimulating endothelial cell function through a series of treatment sessions. It utilises ECP (External Counterpulsation) therapy, where a technician wraps inflatable cuffs (similar to blood pressure cuffs) around the patient’s calves, thighs and hips. The cuffs then coordinate to inflate and deflate between heartbeats. More oxygenated blood to the body and brain is delivered through the external counterpulsation process. This whole process is comforting and soothing for patients, like a massage.

On November 02, 2021, Perimeter Medical Imaging AI, Inc. announced the approval of its Investigational Device Exemption application by the US Food and Drug Administration to conduct a multi-centre, randomised, double-arm study to estimate the FDA breakthrough-device-designated Perimeter B-Series OCT imaging system that uses ImgAssist AI technology to detect regions of interest as compared with the current standard of care for patients undergoing breast conservation surgery. The study plans to enrol over 300 patients across eight US clinical sites, which is to be led by Principal Investigator Dr Alastair Thompson at Baylor College of Medicine.

Jeremy Sobotta, Perimeter’s Chief Executive Officer, stated that the IDE approval marks another important milestone in their ATLAS AI project, building upon the Breakthrough Device Designation that they received in April, as they transition into clinical validation of the AI-enabled, next generation of their commercially available flagship OCT imaging technology. Trial start-up activities are already underway, with world-class sites and a number of the nation’s leading breast surgeons recognised to participate in Perimeter’s pivotal study, which they anticipate initiating in mid-November at their first site at West Cancer Center’s Breast Center in Germantown, Tennessee under the direction of Dr Richard E. Fine.

Dr Alastair Thompson, Principal Investigator and Professor, Section Chief of Breast Surgery and Olga Keith Wiess Chair of Surgery at Baylor College of Medicine and the Dan L Duncan Comprehensive Cancer Center, added, currently, approximately one in four women who undergo breast conservation surgery need reoperation if their surgeon fails to get clear margins. This pivotal study aims to compare the utilisation of Perimeter B-Series imaging technology with artificial intelligence against the standard of care and determine if it can enhance surgeons’ ability to decrease re-operation rates for breast conservation surgery. Importantly, Perimeter’s novel imaging technology with AI fits into the routine surgical process with no further imposition to the patient as it assesses a tissue sample already being extracted. There is a strong medical need for tools to benefit surgeons to identify if they have adequately removed the cancerous tissue in real-time in the operating room and get it right the first time.

SAGA Diagnostics enters into an assay development agreement with AstraZeneca

Lao Saal, co-founder and COO of SAGA Diagnostics, said that SAGAsafe® is a patented improvement of digital PCR that allows approximately 100-fold increased sensitivity compared to competitor methods and can be utilised to quantify sequence variants in tissue samples as well as liquid biopsies such as blood plasma with unprecedented performance. They are honoured that Dr Hadfield and his team have selected SAGA and the SAGAsafe® platform to develop ultrasensitive dPCR methylation assays for AstraZeneca’s clinical research study.

James Hadfield, Director Epigenomics, Oncology Translational Medicine, Oncology R&D, AstraZeneca, said that they have chosen to partner with SAGA because of the ultrasensitive performance of the SAGAsafe® technology and possibility to custom tailor highly complex dPCR assays to meet their desired analytical standards.

On October 29, 2021, the US Food and Drug Administration (FDA) granted Magnus Medical Inc. a Breakthrough Device Designation for its individualised, rapid-acting, non-invasive neurostimulation technology designed for the major depressive disorder treatment in people who have not recovered sufficiently from antidepressant medication or other treatments.

Brett Wingeier, PhD, co-founder and CEO of Magnus Medical, said that the FDA had recognised the novelty and potential of their therapeutic approach for significant depression. Treatment-resistant depression causes enormous human suffering, and it is imperative to find a truly effective solution. With individualised, accelerated treatment, they will finally be able to proffer patients affected by treatment-resistant depression the ability for the management of their symptoms acutely and eventually stay well for a lifetime.

Dr Wingeier further added that they are pleased to support JAZZ Venture Partners and Red Tree Venture Capital. This investment lets them further develop their technology into an integrated treatment system. It helps clinical trials develop individually-targeted, accelerated neuromodulation for the millions of people who suffer from severe depression.

According to DelveInsight ‘Treatment Resistant Depression Market’, the total diagnosed Treatment-resistant depression prevalence in 7MM countries was estimated to be 4,464,781 cases in 2017. Thus, approval of such devices is expected to help in the treatment of this population. Furthermore, according to DelveInsight’s ‘Neurostimulation Devices Market & Competitive Landscape’, the market is expected to grow at a CAGR of 11.76% during the forecast period from 2021 to 2026, to reach USD 11.28 billion. The demand for Neurostimulation Devices Market is mainly driven by the growing incidence of chronic diseases, such as migraine and epilepsy, rising product demand as add-on therapy, the prevalence of lifestyle diseases such as depression and chronic pain, adoption of technologically advanced products, and increasing geriatric population.