RNA Interference: New Class of Drugs In The Fight Against Disease

RNA interference (RNAi) is a fundamental gene-silencing pathway in eukaryotic cells that involves an enzyme called dicer cleaving long pieces of double-stranded RNA into shorter fragments called siRNAs that can cleave complementary mRNA sequences with the help of the RISC complex and argonaute.

RNA interference is a conserved biological response to double-stranded RNA that mediates resistance to both endogenous parasitic and exogenous pathogenic nucleic acids and regulates the expression of protein-coding genes. This natural mechanism for sequence-specific gene silencing has the potential to transform experimental biology and may have significant practical applications in functional genomics, therapeutic intervention, agriculture, and other fields.

RNA interference is a highly conserved biological mechanism that mounts an inhibitory molecular response to pathogenic viral dsRNA. Many studies have shown that RNAi can be used therapeutically in vitro and in vivo to target many respiratory viruses, including SARS-CoV and possibly SARS-CoV-2, in treating and preventing infection.

RNA molecules are extremely diverse, serving a wide range of functions in the cell. RNA was actually underpinning the origin of life as the essential molecule; its structural, enzymatic, and encoding functions recapitulate the key features of life.

There are several types of RNA based on their function: mRNA, which accounts for the information template in protein synthesis; structural RNA with specific binding or enzymatic activity (such as rRNA or tRNA); RNAi, which modulates endogenous mRNA translation; long non-coding RNA (lncRNA), which does not encode for protein synthesis but usually has scaffolding functions; and viral RNAs. Moreover, RNA-based drugs can be divided into four distinct categories based on their structural characteristics and mode of action.

Aptamers: Aptamers are nucleic acid constructs that bind to specific proteins to modulate their function. Several RNA-based aptamers are being developed, and more aptamer-based therapeutics are expected in the future.

Messenger RNAs: mRNA-based therapies work by taking advantage of the fact that even exogenous mRNAs can be translated into functional proteins. Based on their purpose, mRNA-based therapies can be divided into two broad subcategories. Exogenous mRNAs are introduced into cells to replace or supplement endogenous proteins in the first category. The mRNA transcript in the second category is intended to act as a vaccine against infectious diseases or cancer antigens.

Since its discovery, RNA interference therapy has shown great promise in treating diseases such as cancer and influenza, but siRNAs have yet to be fully accepted in clinical practice due to their low stability and drug delivery. Unmodified and unprotected siRNAs, for example, are easily degraded by nuclease and eliminated by the kidneys. The immune system also attacks them. Furthermore, because siRNA therapeutics do not work until they enter the cytoplasm, many difficulties arise during delivery.

To overcome delivery barriers and realize the full potential of RNAi therapeutics, safe and efficient delivery systems that transport ncRNAs to their sites of action with minimal side effects are required. Nanoparticles are the most commonly used RNAi delivery vehicle. Non-viral carriers deliver native ncRNAs, as opposed to viral vectors, which deliver ncRNAs in the form of a viral genome.

RNA therapy is the use of RNA-based molecules to treat or prevent diseases. RNA therapeutics involve the use of coding RNA such as mRNA as well as non-coding RNAs such as small interfering RNAs (siRNA), antisense oligonucleotides (ASO) to target mRNA, aptamers, ribozymes, and clustered regularly interspaced short palindromic repeats-CRISPR-associated (CRISPR/Cas) endonuclease to target proteins and DNA. RNA-based drugs are known to have a wide range of beneficial properties, making them ideal candidates for the development of novel therapeutic strategies.

RNAi is currently used in many research fields and treatments due to its target site specificity and therapeutic potential. Since 2018, some RNA interference drugs have been approved for sale due to their efficacy and safety. RNAi therapeutics are being developed in the disease areas such as neurodegenerative disease, cardiovascular disease, viral infection, RNAi in stem cell therapy, and cancer.

Since the discovery of RNAi, the concept of RNAi therapeutics has exploded into a creative and highly competitive field that has drawn some of the brightest minds and is one of the most heavily invested in fields of biotechnology research. Many pharmaceutical companies devoted to RNAi research are discovering novel ways to treat human ailments using the RNAi mechanism. Although many trials are still in their early stages, the early results only indicate the potential of RNA interference medicines for future therapeutic processes.

ARO-APOC3 developed by Arrowhead Pharmaceuticals is intended to reduce apoC-III production, which is a component of triglyceride-rich lipoproteins (TRLs) such as VLDL and chylomicrons and a key regulator of triglyceride metabolism. The company believes that inhibiting apoC-III production in the liver will result in decreased VLDL synthesis and assembly, improved TRL breakdown, and improved clearance of VLDL and chylomicron remnants.

In June 2019, Arrowhead Pharmaceuticals, Inc. announced that ARO-APOC3 had granted Orphan Drug Designation to ARO-APOC3 for the treatment of familial chylomicronemia syndrome (FCS). In January 2022, Arrowhead Pharmaceuticals launched a Phase III study to assess the efficacy and safety of ARO-APOC3 in adults with familial chylomicronemia syndrome. The trial is currently recruiting participants and is expected to be completed with 60 participants by December 2023.

Fitusiran (Alnylam Pharmaceuticals/Sanofi) is a small interference RNA therapeutic in development for the prophylactic treatment of people with hemophilia A or B, with or without inhibitors. Fitusiran is intended to lower antithrombin, a protein that inhibits blood clotting, to promote thrombin generation and thereby rebalance hemostasis and prevent bleeds. Fitusiran is made possible by Alnylam Pharmaceutical Inc.’s ESC-GalNAc conjugate technology, which allows for subcutaneous dosing with increased potency and durability.

On July 10, 2022, the positive findings from the Phase III ATLAS-PPX study, which assessed the efficacy and safety of once-monthly fitusiran (80 mg) prophylaxis in adults and adolescents with severe hemophilia A or B who had previously received prior factor or bypassing agent (BPA) prophylaxis, were presented in a late-breaking session at the International Society on Thrombosis and Haemostasis (ISTH) 2022 Congress. The study met the primary endpoint, demonstrating that fitusiran prophylaxis reduced bleeding episodes significantly more than prior factor or BPA prophylaxis. Fitusiran is currently being studied in clinical trials for hemophilia treatment and has not been evaluated by any regulatory authority.

DCR-HBVS is a GalXC RNA interference therapy being developed by Roche for the treatment of chronic hepatitis B virus (HBV) infection. Chronic HBV increases the risk of developing liver failure, cancer, or cirrhosis, which permanently scars the liver. DCR-HBVS inhibits viral hepatitis B surface antigen (HBsAg) messenger RNA (mRNA) and protein expression in liver hepatocytes. HBsAg is a marker used to determine the extent of chronic HBV viral activity and is required for the HBV virus lifecycle. In mouse models of HBV infection, preclinical data showed a 99.9% reduction in circulating HBsAg.

DCR-HBVS has the potential to contribute to the ultimate goal of achieving a functional cure in chronic HBV patients and is currently being studied by Roche as part of a Phase II clinical trial in combination with other treatment regimens to induce functional cures in patients. Furthermore, it is being tested in phase I for chronic hepatitis B treatment.

What Lies Ahead in the RNA Interference Treatment Market?

Significant progress has been made in the advancement of RNAi therapeutics in a remarkably short period. Since Fire and Mello discovered in 1998 that RNAi is mediated by long double-stranded RNA in Caenorhabditis elegans, and Tuschl and his Max Planck Institute colleagues published in 2001 that synthetic siRNAs can silence target genes in mammalian systems, there has been an explosion in reports on therapeutic applications that harness RNAi. Clearly, the main barrier to the widespread use of RNAi therapeutics is delivery.

Nonetheless, tremendous progress has been made with new conjugation, complexation, and lipid-based approaches, though the challenge of siRNA delivery for all cell types in all organs remains unsolved. Once that barrier has been overcome, the development of RNAi therapeutics will be hampered primarily by target validation. It will then be possible to rapidly advance RNAi therapeutics in clinical studies against potentially any disease target and thus treat disease in a novel way. The ongoing RNAi clinical trials with siRNAs may reveal the exciting potential of RNAi therapeutics as the next major class of drug molecules in the near future.

Novo Nordisk Reports Phase III Results of Concizumab Drug for Hemophilia A or B No... 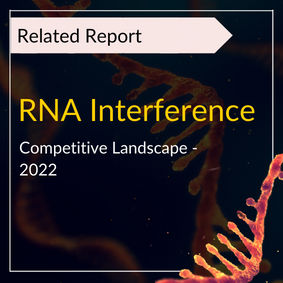