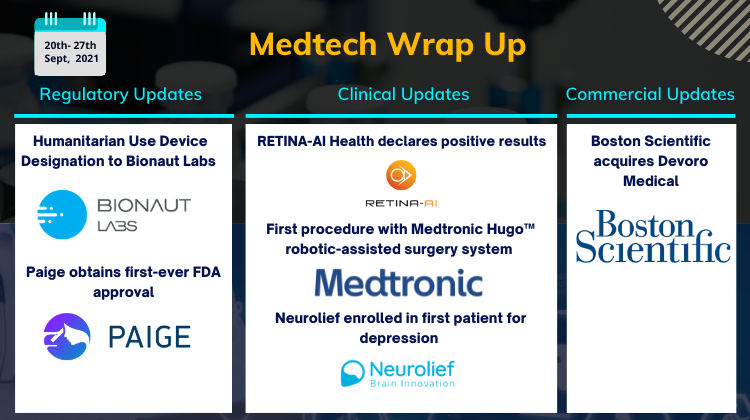 On September 20, 2021, RETINA-AI Health, Inc. announced optimistic results from the pivotal study of the RETINA-AI Galaxy™, a multi-device compatible autonomous diabetic retinopathy screening device planned for use in primary care settings. The company has also filed for the US Food and Drug Administration (FDA) for clearance.

These results were presented at the Society for Imaging Informatics in Medicine (SiiM)’s Conference on Machine Intelligence in Medical Imaging (CMIMI21).

The company conducted a multi-center, multi-device observational study (NCT04774822) and recruited 397 subjects aged 22 years or above and having diabetes for each camera from four primary care sites. The performance of the RETINA-AI Galaxy™ software as a medical device (SaMD) was evaluated on five robotic fundus cameras:  CenterVue DRSPlus, Crystalvue NFC-700, NextSight Nexy, Topcon NW400, and CenterVue DRS. The study met all primary endpoints and reached a sensitivity of 100% on all 5 cameras for definite vtDR, probable vtDR, and vtDR in the absence of CSDME, each with specificity at or above 82.5%.

Dr. Stephen G. Odaibo, RETINA-AI Health Inc.’s Founder and CEO, AI/ML expert, and retina specialist, said that over 35 million Americans and 450 million people globally suffer from Diabetes. And each diabetic patient needs an annual eye exam, however, most do not receive it due to several factors. Artificial Intelligence can play a vital role in increasing access to care, but till now there has been a severe lack of fundus camera options, which have undergone rigorous validation for use as accessories to autonomous AI systems. This is the first such study, which evaluates an autonomous AI system on cameras from multiple manufacturers. The RETINA-AI Galaxy™ device has been submitted to the FDA for review.

According to DelveInsight’s analysis, the approval of RETINA-AI Galaxy™ software will be a game-changer in the annual examination of the eye in diabetic patients. With the increasing burden of diabetes globally, diabetic eye diseases patients such as diabetic retinopathy, diabetic macular edema, cataracts, and glaucoma have increased over the years. The Diabetes market is expected to be driven by demand and technological advancements in the imaging industry.

Since 2019, the company has been a planned investor in Devoro Medical and presently holds an equity stake of approximately 16%. It will make an upfront payment of approximately USD 269 million for the 84% stake not yet owned and up to USD 67 million upon achieving specific clinical and regulatory milestones.

Jeff Mirviss, executive vice president and president, Peripheral Interventions, Boston Scientific, said that the addition of the WOLF platform advances their efforts to ensure physicians have the right tools to improve procedural efficiencies. Clot management remains a core focus of their business. Upon commercialization, this highly differentiated technology will complement and expand their offerings to a full suite of interventional strategies for thromboembolism, including the EkoSonic™ Endovascular System (EKOS) and the AngioJet™ Thrombectomy System.

According to DelveInsight’s ‘Clot Management Devices Market,’ the analyst estimates that the businesses, when combined, will help Boston Scientific to emerge as a market leader. The Clot Management Devices market is expected to be driven by the rising prevalence of cardiovascular diseases and increasing access to treatment.

Michael R. Jaff, D.O., chief medical officer and vice president of clinical affairs, technology and innovation, Peripheral Interventions, Boston Scientific, told the WOLF platform is a compelling new option for physicians performing thrombectomy procedures and, importantly, it is designed to target and eliminate clots without damaging blood vessels, while also decreasing blood-loss, which may improve outcomes. They look forward to accelerating the progress of this platform technology to help patients who are dealing with these common yet challenging health conditions.

On September 22, 2021, Paige, the AI-based diagnostic software in pathology, received the de novo marketing authorization for Paige Prostate, a clinical-grade AI solution for prostate cancer detection from the US Food and Drug Administration (FDA). This is the first AI-based pathology product to obtain de novo approval from the FDA, permitting in vitro diagnostic (IVD) use via Paige’s FDA-cleared FullFocus™ digital pathology viewer.

There is a requirement for early detection of cancer for better treatment. Paige Prostate is a cancer detection solution, which recognizes foci suspicious for cancer and proffers this information to the pathologist. It is intended to help pathologists find small foci of cancer and allow pathologists to work efficiently and confidently in their diagnostic process.

David Klimstra, M.DCo-Founder and Chief Medical Officer at Paige, said that this approval of Paige Prostate by the FDA marks the initiation of a new era in the use of computer-assisted diagnostics for pathology. The approval shows the rigor with which Paige Prostate has been confirmed as the first clinical-grade AI technology to aid pathologists in understanding routinely stained slides. This innovation leads to the introduction of several future tools to standardize pathology diagnosis, accelerate the diagnostic process, and offer pathologists and patients greater comfort from the added scrutiny of their pathology slides.

According to DelveInsight’s analyst, the approval is a landmark achievement in digital pathology and demonstrates how robust technology drives the cancer diagnostics market.

Madan Krishnan, vice president, and managing director, India Medtronic Pvt Ltd, said that with the availability of the Hugo RAS system in India, they know the future of surgery is here. Medtronic is creating robotic-assisted surgery solutions optimized for what clinicians need today, and that can be upgraded as the technology evolves and usage expands in the years to come. They are grateful for the opportunity to partner with Apollo Hospitals on this exciting milestone and are looking forward to advancing access to the latest therapies for patients.

As per the analyst, in India, almost 70% of surgeries are performed as open procedures. The introduction of the Hugo™ RAS system will benefit minimally invasive surgery to more patients than ever before. This will offer fewer complications, shorter hospital stays, faster return to normal activities, and smaller scars. This is expected to drive the robot-assisted surgery market in India.

The Medtronic Hugo RAS system is commercially available in specific geographies and has received a CE mark in the EU but is not approved in the US.

Relivion DP, the non-invasive, multi-channel brain neuromodulation system, is planned for treatment of neurological and neuropsychiatric conditions at home and has received breakthrough device designation from the US Food and Drug Administration in August 2020.

The study is a multi-center, two-arm clinical study named MOOD and will estimate the safety and efficacy of the system as an adjunctive to MDD pharmaceutical management. The study will involve adults who have had inadequate improvement with antidepressant drugs.

According to the National Institute of Mental Health data (2017), an estimated 17.3 million adults aged 18 or older in the United States had at least one major depressive episode. This number represented 7.1% of all US adults.

The analyst expects the Major Depressive Disorder market to be driven by the increasing number of cases and the demand for non-pharmacological solutions. The Relivion DP device proffers a promising and easy solution with the potential to address the unmet needs of patients who do not respond to traditional therapies.

On September 23, 2021, the US Food and Drug Administration (FDA) granted the Bionaut Labs humanitarian use device (HUD) designation for BNL-201 for the local treatment of Dandy-Walker Syndrome, a rare pediatric neurological disorder.

Dandy-Walker Syndrome is a congenital brain malformation usually diagnosed in childhood and causes a plethora of symptoms comprising intellectual disabilities, delayed motor development, muscle stiffness, partial paralysis, seizures, hearing loss, and vision problems. To date, the only treatment options available are invasive intracranial surgical procedures, which are prone to infections and complications, and many patients suffer from shorter life spans with poor quality of life.

BNL-201 provides a minimally invasive local microsurgery procedure to fenestrate the cyst that leads to this condition and reduce surgical trauma, to restore patient brain function and development.

Michael Shpigelmacher, co-founder and CEO, Bionaut Labs, said the granting humanitarian use device designation by the FDA for BNL-101 is a vital regulatory milestone for Bionaut Labs and represents a novel treatment modality for Dandy-Walker patients and their families. This designation is a vital step in getting BNL-201 into the clinic and, eventually, to those who suffer from this debilitating disease. They seek to work with the FDA as they pursue their aim of giving new treatment options to patients suffering from this and many other devastating CNS disorders.