GSK announced that the company’s vaccine for protection against mumps, measles, and rubella (MMR) had been approved by the U.S. FDA. According to data from six clinical studies, the company filed a Biologics License Application in August 2021.

GSK’s MMR vaccine first met with regulatory approval in 1997, when the biologic was approved for marketing in Germany. Since then, it has been approved in every European country and Canada, Australia, and New Zealand. Clinical trials included approximately 17,000 participants from each vaccination age group (12 to 15 months, 4 to 6 years old, and over seven years of age) to evaluate the safety and efficacy while mirroring the ages of recommended vaccination. In addition to this, the studies were designed to compare the effectiveness against the already approved competition in the market.

Since the COVID-19 pandemic, child vaccination rates have dropped; on the other hand, measles cases have risen.

The scientific community has speculated whether low vaccination rates are attributed to global healthcare inadequacies exacerbated during the pandemic. Additional causes of the measles outbreaks may be low vaccine efficacy or even physician failure to express the criticality of a child’s vaccination schedule.

As per the United States Centers for Disease Control and Prevention, children should receive two vaccinations of an MMR vaccine before adolescence. Before the approval of GSK’s MMR vaccine in the United States, only one MMR vaccine was available. This vaccine is licensed to Merck and can be administered to children of a year or older and has been a standard of care since its approval in 1971. Pharma companies have been working diligently to develop an alternative, considering the opportunity to revive the MMR vaccine market.

BioSpace reported that the measles vaccines market may reach USD 6.41 billion by 2026 due to the rising cases. The annual growth rate is predicted to be 7.1% annually.

Zuranolone is an investigational two-week, a once-daily oral drug developed for major depressive disorder and postpartum depression. The SKYLARK study in postpartum depression was a randomized, double-blind, placebo-controlled study evaluating the efficacy & safety of Zuranolone 50 mg dosed once daily for 14 days as compared to a placebo. Women enrolled in the study had a total score equal to or greater than 26 at baseline in the HAMD-17 and were followed for up to 45 days. The study population included approximately 22 percent BlackAfrican/American women and 38 percent Hispanic/Latina women.

Zuranolone 50 mg was well-tolerated and showed a safety profile consistent with that observed in the clinical development program. In women in both treatment groups who experienced treatment-emergent adverse events, the majority of severity was mild to moderate. The most common treatment-emergent adverse events were drowsiness, sedation, dizziness, urinary tract infection, headache, nausea, diarrhea, and COVID-19.

Postpartum Depression is a common medical conditions during and after pregnancy and is predicted to affect approximately 1 in 8 women who have given birth in the United States, or about 500,000 women annually. Symptoms of postpartum depression include changes in sleep patterns and appetite, depressed mood, loss of interest in activities, decreased energy, feelings of guilt or worthlessness, trouble concentrating, and thoughts of suicide. While the United States Department of Health and Human Services recognized it as a high-priority public health issue where screening rates vary, and nearly 70% of women with postpartum depression may go undiagnosed.

Interim data results from a mid-stage combination study of CG Oncology’s oncolytic immunotherapy and a checkpoint inhibitor is showing promising outcomes. The data states that almost all evaluable patients diagnosed with Non-Muscle-Invasive Bladder Cancer (NIMBC) who are unresponsive to Bacillus Calmette-Guerin (BCG) have accomplished complete response after three months. At the prestigious American Society of Clinical Oncology conference, CG Oncology, Inc. presented the combination of CG0070 and Merck’s Keytruda, and exhibited promising preliminary efficacy from a Phase Ib/II study of a combination of CG0070 and Bristol Myers Squibb’s checkpoint inhibitor, Opdivo as a neoadjuvant immunotherapy for Muscle-Invasive Bladder Cancer (MIBC) in cisplatin-ineligible patients.

The data was taken from the Phase II CORE 1 clinical trial study where combination of CG0070 with Keytruda indicated that 92% of patients evaluable for efficacy achieved a complete response after 3 months. A live attenuated vaccine form of Mycobacterium bovis – BCG is considered to be the standard of care for Non-Muscle-Invasive Bladder Cancer. CG0070 and Keytruda combination was observed to be well tolerated.

Roger Li, a physician at the Moffitt Cancer Center in Tampa and lead investigator for the bladder study said the use of an oncolytic virus like CG0070 to first engage an immune response and then “amplifying that response” with a checkpoint inhibitor is yielding exciting results in bladder cancer. He said that CG0070 may be a potential game-changer to combat BCG-unresponsive bladder cancer.

Seattle-based company – Parse Biosciences, a leading provider of scalable single-cell sequencing solutions, declared a partnership with Molecular Diagnostics Korea (MDxK) that will aid in expanding its presence in Asia by providing its entire line of Evercode™ Whole Transcriptome products as well as Cell and Nuclei Fixation kits in South Korea. Molecular Diagnostics Korea provides several services, products, instruments and consumables to support molecular research. The company’s specialization in areas of multi-omics, biologics, crystallography, and bio-banking has led to its status as a premier supplier of research tools with superior outcomes.

Parse Biosciences announced a USD 41.5M Series B round in February 2022 which shortly led to the partnership afterwards. It enables the company to expand the commercialization of its single-cell RNA-Seq products in response to the growing demand. It further provides distribution support for the expanding product portfolio, which includes applications in immune profiling, chromatin profiling, CRISPR screens, and targeted gene panels. This approach of single-cell sequencing is based on the Evercode technology, a patented technique of split-pool combinatorial barcoding that enables researchers to sequence cells at scale without the need for expensive lab equipment.

“We are working hard to bring simpler, more scalable, and affordable solutions to researchers, regardless of location,” said Alex Rosenberg, CEO and Co-founder of Parse Biosciences. “We are thrilled to partner with MDxK to broaden access to our technology and support the growing single-cell sequencing community worldwide.” “We are very pleased to work with Parse Biosciences and proud of providing such advanced technology to the rapidly growing single-cell research field,” said MDxK CEO SungBo Shim.

The technology created by Parse Biosciences has grown rapidly since the commercial availability of its products in 2021. Now the expansion is seen beyond North America to Europe, New Zealand, Australia, and Southeast Asia, Parse is now utilized across 300 labs worldwide.

Amgen exhibited positive topline data clinical trial results from the Phase 2 OCEAN(a)-DOSE study, evaluating olpasiran (formerly AMG 890) in 281 adult patients with Lipoprotein(a), or Lp(a), levels over 150 nmol/L and evidence of atherosclerotic cardiovascular disease (ASCVD). Olpasiran is considered to be a small interfering RNA designed to lower the body’s production of apolipoprotein(a), a key component of Lp(a) that has been associated with an increased risk of cardiovascular events. Olpasiran, previously known as AMG 890, has been found to reduce levels of lipoprotein, or Lp(a), which is a risk factor for cardiovascular disease. Research suggests that high levels of Lp(a) contributes to stroke, peripheral arterial disease and heart attack. Olpasiran is formulated to lower the production of a component of Lp(a).

In the double-blind placebo-controlled treatment period, olpasiran was administered up to 225 mg subcutaneously every 12 weeks to patients with a median baseline Lp(a) of approximately 260 nmol/L. These data demonstrated a significant reduction from baseline in Lp(a) of up to or greater than 90 percent at week 36 (primary endpoint) and week 48 (end of treatment period) for the majority of doses. No new safety concerns were identified during this treatment period.

Data from the Phase 2 study will be displayed at a future medical congress and submitted for publication. No new safety concerns were identified in the trial, the company said.

A fully integrated biopharmaceutical company – Elevar Therapeutics, is dedicated to elevate the treatment experiences and outcomes for patients who have limited or inadequate therapeutic options. It exhibited the results of its Phase 2 clinical trial study RM-202 of rivoceranib, which is an orally administered tyrosine kinase inhibitor (TKI), in patients experiencing progressive recurrent or metastatic adenoid cystic carcinoma.

The open-label clinical trial was conducted at 11 sites in the U.S. and South Korea to investigate the efficacy and safety of rivoceranib in patients with progressive recurrent or metastatic adenoid cystic carcinoma. Rivoceranib has been granted orphan drug designation in the U.S.. It is a small molecule anti-angiogenic, with more than 6,000 patients studied in multiple cancers. Elevar has global commercialization rights for rivoceranib, excluding China. Adenoid Cystic Carcinoma (ACC) is a rare malignancy that occurs within the secretory glands, most commonly in the major and minor salivary glands of the head and neck, but also found in the breast, skin and elsewhere 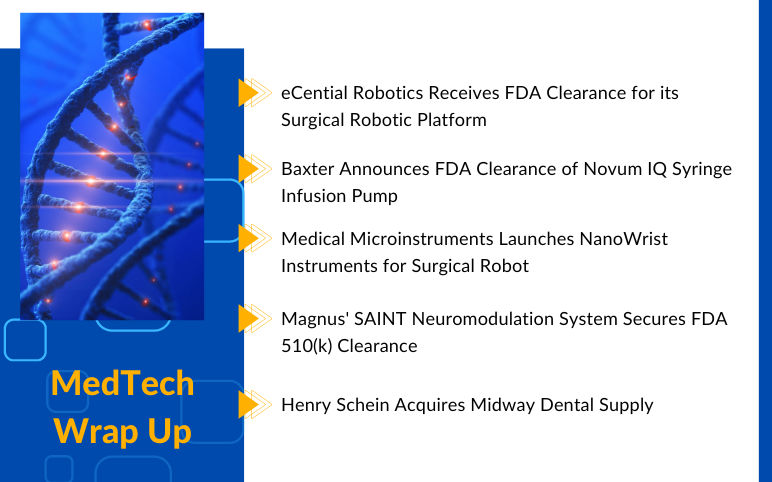 eCential Robotics Receives FDA Clearance for its Surgical Robotic Platform for Spine Surgery The FDA has approved a r... 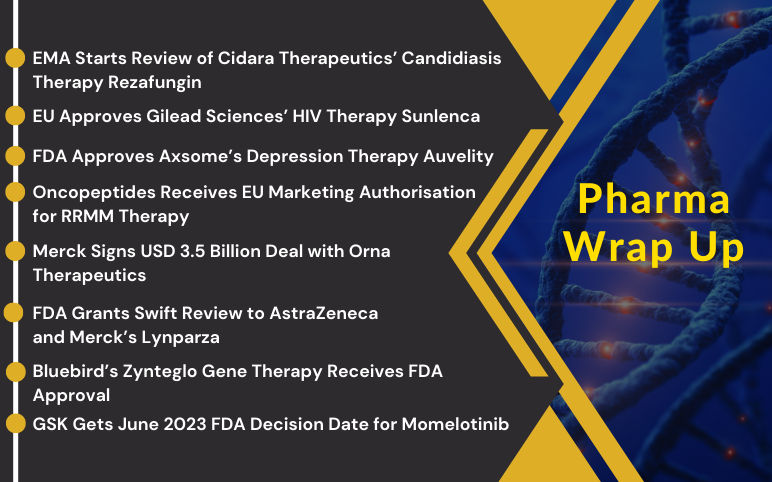 Global atrial fibrillation market is expected to grow to $12.5 billion by 2020

Merck Focuses its Research on Hard to Treat Cancers